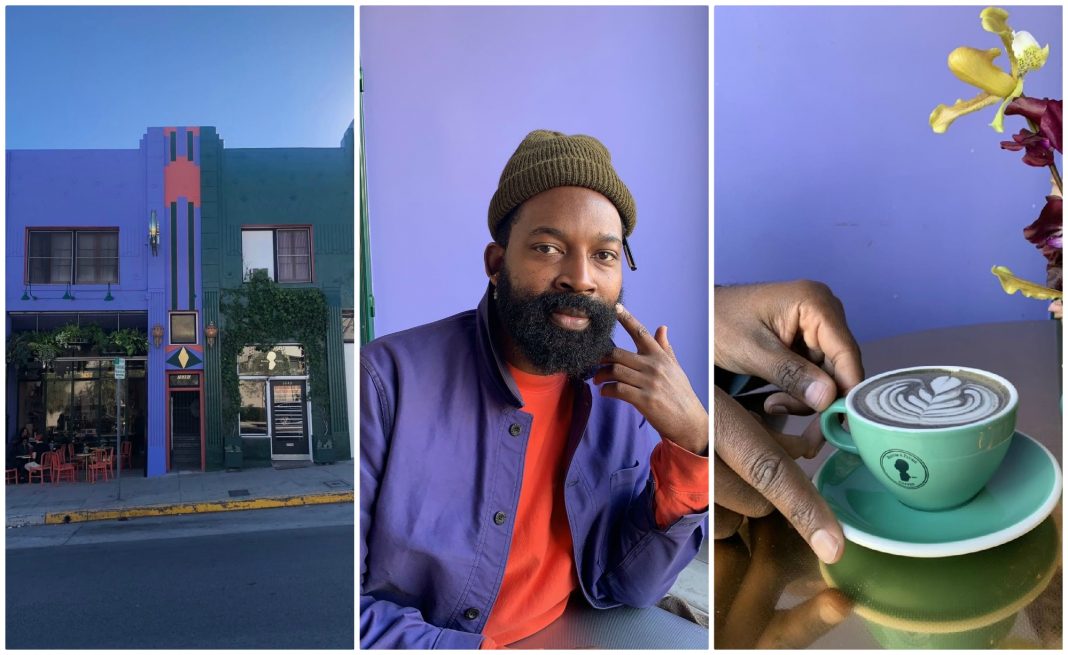 It’s the second week of February, and for florists that typically means no sleep till Valentine’s Day. But for Bloom & Plume‘s Maurice Harris, life has been crazy for another reason.

After nearly a year of construction delays, the artist and floral designer extraordinaire finally unlocked the doors to Bloom & Plume Coffee, a cafe located next to his Bloom & Plume floral studio on West Temple Street in Historic Filipinotown. (Motto: “Thirst come, thirst served”.) While still technically in a soft-opening phase, Bloom & Plume Coffee is already in the swing of things, serving up Stumptown beans pulled on a shiny new La Marzocco GB5, fresh juices, Friends & Family pastries, sweet and savory toasts on Bub and Grandma’s bread, and house-made cornmeal waffles, all in a space that’s a conscious departure from the cafe mainstream—and all infused with Harris’s specific point of view.

A resident of HiFi for 15 years, Harris says, “I’ve always wanted a place to walk to that I could hang out at.” Besides creating a space that he would patronize, Harris and his brother, Moses, opened the coffee shop to keep some of their work in the neighborhood.

Harris makes “extremely luxurious,” high-end arrangements for big-name clients and big-deal events, including this weekend’s Frieze L.A. He’s also known for his calendar series and editorial-quality photo shoots promoting floral holidays, although those endeavors are temporarily on hold since he’s added food-and-beverage entrepreneur to his resume.

“Everything that we do basically goes to Hancock Park and west,” Harris says. “And I think we do really cool stuff, but none of it gets to stay in the community, and to live and breathe here.”

He has both local fans and a wider, eager audience, thanks to the shop’s jaw-droppingly beautiful Instagram feed. “There are a lot of people who are interested and excited about the work that I do and the voice that I have and the story that I tell. But there wasn’t really a way for them to engage in the brand.” So, given his various interests, a cafe that’s an extension of Bloom & Plume made the most sense for what he hopes to accomplish. “I think the coffee space is very white-male dominated, and I was very interested in putting literal color to it,” Harris adds.

Bright violet walls, deep green accents, and salmon pink chairs echo Harris’s love for and skill with color. Some of the cafe’s interior elements were custom made by local designer-builder Carlos Anthony Lopez, aka the Project Assassin. It’s the latest ambitious outlet for the multihyphenate creative from Stockton, who originally moved to L.A. to attend Otis College of Art and Design.

You Can Take a Jeepney Tour in Filipinotown, and It’s Legit Fun