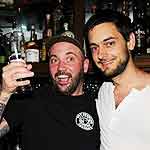 L.A. beer guy Ryan Sweeney could never be accused of being a one-trick pony. And yet, he’s obsessed about never becoming one. To branch out from his beer-focused bars around town (the Oktoberfest-esque Verdugo Bar, WeHo’s lounge-y The Surly Goat, and the Belgian-intensive Little Bear), he decided to open the Blind Donkey, a new whiskey bar in Pasadena that debuts tonight. But he stood back and let someone else take creative charge of this project for a change: John Bower. Bower is the whiskey guy and, according to Sweeney, the Blind Donkey is his vision. (Other partners also include Brandon Bradford and Alen Aivazian.)

A Pasadena native, Bower felt that Old Town was missing “something refined and casual, a whiskey bar that has an amazing selection and isn’t pretentious.” To drive home the point of its approachability, patrons are welcome to purchase a one- or two-ouncer of whiskey (there are about 68 in stock) to simply get a taste. “So if there’s something you’ve always been dying to try but don’t want to shell out $24 for a whiskey, you can get a taste for half the price. That’s something that’s very important to me because there was a lot of stuff I didn’t get to try when I was younger and didn’t have a lot of money to spend that I would have loved to sample,” said Bower.

And yup, there will be whiskey, scotch and rye flights ($11 to $17) available, each containing three pours. Those who also want to indulge in Sweeney’s curated tap list of 10 beers should order up the boilermakers. However you won’t find any high-ABV beers here.

“I want things that go with whiskey,” said Sweeney. “Because the last thing you need is a 101 proof whiskey and a 12 percent beer to back it up. You don’t need that. You need to have a beer that works with the whiskey, and this is first and foremost a whiskey bar.”

The cocktail list will naturally focus on whiskey drinks but there will be a vodka drink and a gin one thrown in to round things out. Nothing frou-y but, rather, approachable, remember? So you’ll find libations “with ingredients you can pronounce,” said Bower, as well as a seasonal Old Fashioned which will highlight a different Robin’s Nest jam every couple of months. Currently it’s Butler’s Old Fashioned made with peach vanilla jam. Next up for winter is red plum and cinnamon.

Other plans in the works for the bar? A chess tournament with shots of whiskey (Sweeney hopes), day-drinking friendly hours starting at 11am and an extended bar food menu. (Think chicken wings, not burgers.) For now, they’re starting with a limited menu of triple-fried fries and pickle chips until they get off the ground. “But they’re really good fries. Damn good,” Sweeney asserted. And almost in unison, everyone else working the bar chimed in: “No, seriously. They’re really good.”