Home Uncategorized Black as Midnight on a Moonless Night 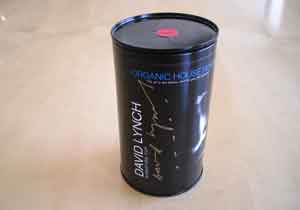 For years now we’ve listened to David Lynch give the morning weather report on Indie 103.1 FM (if you haven’t, you should) during which he occasionally urges listeners to check out his signature coffee. Wait—back up. David Lynch makes coffee? Indeed!

Actually, it’s a pretty standard medium roast, easily as good as anything else you’d pick up at Starbucks or the Coffee Bean. Low acid, balanced, great for breakfast.

We kid! So far we haven’t hallucinated about talking logs or Laura Dern any more than usual. But with fair trade practices and a portion of proceeds going to the David Lynch Film Scholarships Fund at AFI, we’ll keep trying.