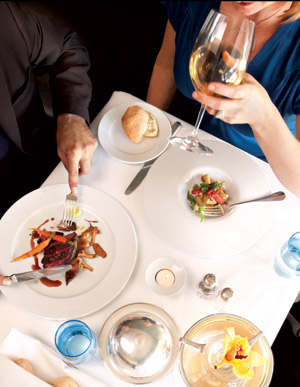 The first time I went to Bistro LQ, I hardly knew what to make of it. Fine silver glistened on the table, sending signals of elegant ambitions, while the waitstaff, drenched in black and sporting bright red Converse All Stars, were consciously hip. Part matron, part coquette, the menu listed no fewer than 27 dishes, many derived from France but with a slew of side trips to Latin America and Asia. The “meurette style” eggs poached in red wine and accented with sautéed chanterelles, cod jolted by a chipotle-laced jus and nopales (diced cactus paddles), and uni tapioca pudding with a shot of yuzu gelée all crowded into two pages of dense script. While the eggs were phenomenal, a musky reminder of the straight lines that gird the provincial French table, I held off on reviewing the place. If I had a prayer of understanding Laurent Quenioux’s new restaurant, I was going to have to give it time to jell.

Born in the Sologne region of France, Quenioux has one of those severe Dickensian backgrounds in which kitchen training begins at 14 as an apprentice and continues through a succession of storied restaurants (including, in Quenioux’s case, Louis Outhier’s Provençal idyll, L’Oasis). He was deeply impressed with nouvelle cuisine’s attempts to lighten the formal repertoire and came to Los Angeles in the days when demigods such as Paul Bocuse and Roger Vergé would make cameo appearances at L’Ermitage. Too young to be an ambassador, Quenioux was sent here with Joachim Splichal, whom he’d worked beside at the palatial Negresco Hotel in Nice, to launch the members-only Regency Club in Westwood. The greater public got to see his talent after he started the Seventh Street Bistro in the Fine Arts Building downtown in 1985. With its Batchelder tile and Gladding McBean terra-cotta blocks, the ground floor of the 1927 Romanesque jewel was an ideal setting for his food—classicism interpreted through a nouvelle prism.

Luck was against him, though. Construction of the Red Line in the early ’90s closed off access to the street and sent droves of rats up from the subterranean depths. He shuttered the business in 1995. That’s when Quenioux went on something of a walkabout. As executive chef for the Dodgers during the last years of the O’Malley era, Quenioux was overqualified to cook up Tommy Lasorda’s pasta and Vin Scully’s steak. For several years he ran the aspiring if uneven Bistro K in South Pasadena; after selling that, he was a food consultant until a space became available on Beverly Boulevard, L.A.’s most innovative restaurant row. He could finally make his return.

Bistro LQ is located where Jean-Pierre Bosc operated Mimosa for more than a decade. A bistro virtuoso, Bosc led Angelenos and expats from poireaux vinaigrette to daube to île flottante with understated bravado. Quenioux has refashioned the pale yellow farmhouse interior into a room that alternates between white and taupe, with mod bentwood seating and tables draped in white. It’s a chic redesign and yet not exactly a radical departure—one bistro giving way to another in a city that has few French restaurants to speak of. When I came back three months after my initial visit and found the same mix of veal feet jam, haddock with green tea sabayon, and venison tartare with tortilla strips, I realized that despite the potential for confusion, this was the vision to which Quenioux was committed.

The truth is, Bistro LQ barely qualifies as a bistro. From briny herrings with warm potato salad to lentils with a roasted ham bone, bistro cooking is a Gallic birthright. Regionally inflected and stubbornly unaffected, it embodies urban France’s flirtation with the rustic, and it’s been around since the late 19th century. The style has ruled, fallen (there was a bad stretch some decades ago), and been reanimated—new formulations are always cropping up in Paris—but has always persevered.

In contrast, nouvelle cuisine, Quenioux’s other great influence, was engaged in a battle with detractors from the moment it sprang up in the 1970s. The portions were tiny, the presentations overwrought (dotting the circumference of a plate was a favorite); even its newness appeared to be a ploy by the journalists behind the Gault Millau restaurant guide to position their influential publication against the ossified catalog put out by Michelin. But all was not negative. Chefs were encouraged to express what resonated for them, cook like individuals rather than echo tradition, and seek inspiration abroad. Well, at least to take a peek at it. A dish that incorporated vanilla bean or lemongrass was so mind-blowingly exotic to sheltered French chefs that it would invariably be called retour des Indes, as in “return from the Indies.” Quenioux’s entire sensibility is a dialogue between the nouvelle, with its penchant for lightness and curiosity, and the rigorous classicism that spawned it. But he also mixes in an openness to what L.A. can offer, searching for junctures where one culture can amplify another on the plate. Huitlacoche, a naturally fermented form of corn, lends a smoky tinge to the Pencove mussels. Together with panisses, chickpea crepes native to Nice, the combination of regional French and ancestral Mexican sparkles with newness. Quenioux seems particularly taken with masa, a staple of the Mexican table, finding several ways to use it with game. Mini cylinders of sweet tamale dough magnify the intensity of the braised hare. Tender boar shank—a meat that can send the French reeling into the mists of history—is served on a sope, the corn flour disk catching every drop of a guajillo-boosted sauce.

Curiosity can get the better of Quenioux, however. A dish that brings together sautéed salmon, pasilla chiles, eggplant pudding, and crystallized ginger goes a zip code too far. It’s all over the place. The cod with bouillabaisse chipotle jus and nopales sounds intriguing but proves to be little more than a spicy cream reduction, the nopales nowhere to be found.

The irony is that the closer Quenioux hews to France, the more successful the dish. Sautéed foie gras lacquered with a reduction of vin chaud, or mulled wine, packs an autumnal power that calls for something unexpected, like an El Dorado County gamay noir from the broad wine selection. The hanger steak, that workhorse of the bistro menu, is upgraded with an especially thin cut, a churrasco-like sear, and oven-roasted glazed shallots. A deftly achieved ragout of artichokes alludes to artichokes Barigoule, a timeless recipe of Provence that is reinvented here with slices of tender goat cheese. The côte de boeuf is accompanied by ramekins of anchovy butter, bone marrow, and wild mushrooms. Crowning the whole is a pastry envelope filled with oxtail and veal feet jam—a combination so seductive, so timeless and simmered, that it conveys French cuisine not as a genre but as an atavistic experience.

Despite the authority of such cooking, Quenioux seems apprehensive, as if he’s wondering, Can it be enough? Even the dessert menu carries heavy freight. Along with ten cheese garnishes ranging from blueberry gelée to homemade green ketchup, it pre-sents four kinds of breads; six flavors of tisanes, or herbal infusions; three varieties of French press coffee; and four teas. A table of people, heads bowed as they unscramble the document, takes on a penitential air. With his eight desserts, pastry chef Mohamed Morseli has to fight for face time amid this onslaught. He, too, has a gift for the unexpected pairing—the intensity of mirabelle plum eau-de-vie ice cream perfectly complementing the pineapple tarte tatin. Morseli’s rum-soaked baba with crème chiboust is a moist, standout rendition, but other invocations of French ritual overreach. Why load down the tiny kitchen by providing a huge selection of petits fours? Several of the confections are indistinguishable because they’re made from brittle choux pastry, while some taste as if they’ve been filled too far in advance.

Lopping off about a third of the menu would go a long way toward avoiding such missteps. It’s not just a matter of execution—it would help customers pin the place down. The plethora of offerings that to a chef can appear like generosity can to a customer look like the result of an unchained id. Still, in a time when so many restaurants seem culled from a playbook rather than an actual sensibility, Bistro LQ is a welcome reminder of fundamental truths. It is not impersonally smooth. Nor is it a vehicle for self-promotion. Laurent Quenioux isn’t in the dining room chitchatting; he is in the kitchen working, a chef alive to the possibilities that both his adopted city and his own heritage present.