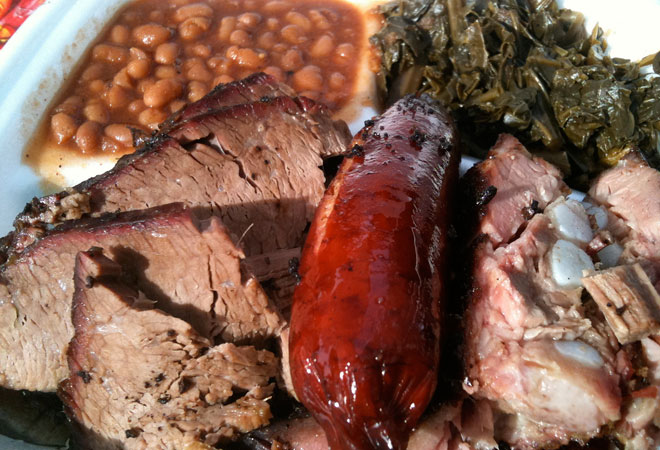 The internet is awash in fundraising efforts but few of them are as sweet—or as smoky—as Bigmista’s. Neil and Phyllis Strawder, owners of the popular farmers’ market barbecue stand, recently launched a GoFundMe campaign that aims to raise $20,000 so they can open Bigmista’s as a brick and mortar restaurant. In 14 days, the campaign has yielded more than $12,000. Rewards include a rack of ribs, a Bigmista’s cookbook, an all-you-can-eat rib fest, and having a sandwich named after you.

Bigmista’s restaurant will be in downtown at 4th and Main in the Medallion building, which is being transformed into a mixed-use development with almost 100 condos and a large retail area designed to house six restaurants, a permanent farmers market, and several specialty shops featuring local artisans and vendors. John Edwards, whose company Raw Inspiration runs several L.A. area farmers markets, is overseeing the retail space.

“We’ve got the whole back of the house covered: the kitchen equipment, the smoker, and all of that,” says Neil Strawder, aka Bigmista. “This [campaign] is mainly for the front of house: the furniture, the menu, the painting, the design, the decoration, the branding. We want to make sure we have enough so we can get everything ready to go as soon as possible. We don’t want to get held up toward the end and find there’s something we need and not have the funding for it.”

According to Strawder, Bigmista’s restaurant will have more than 800 square feet of space, about half of which will be seating and half of which will be the kitchen area. As of now, the plan is to have customers place their orders at one end of a long counter. As you walk down the line you can watch carvers slice the meat and prepare your order. Once you get to the end, you’ll get your sides and drinks and pay for your meal. Strawder says the site will have a large covered outdoor food court that patrons of multiple restaurants in the building can use.

Strawder and his wife and business partner, Phyllis, have been operating at farmers markets for seven years—and searching for a brick-and-mortar spot for the last two.

“We had looked in downtown but either we don’t like anything or we couldn’t afford it,” Strawder says. “We were looking closer to home: Torrance, Long Beach, Carson, Hawthorne, and all the areas in between. John Edwards, who was taking over this whole retail project, knew our food and knew that we were popular. We took a look at it and they made us an offer we couldn’t refuse.”

After several delays, Strawder is aiming to open the Bigmista’s restaurant at the end of April or beginning of May. When he does, he won’t give up the farmers market circuit that has earned him a legion of local fans. You can currently find his barbecue stand, known for its ribs, pulled pork, and pastrami (we’re partial to the pastrami), on Wednesdays in Pershing Square, on Thursdays in Century City, on Fridays in the Bank of America plaza in downtown, and on Sundays in Atwater. “We’ll probably keep doing the Pershing Square and Atwater markets,” Strawder says.

As of Monday morning, the Kickstarter campaign had raked in almost $5,000, thanks in part to heavy promotion from the BBQ Brethren website, where Strawder is an active member. ” A lot of people are donating saying we don’t need the rewards, just make it happen,” Strawder says. “A lot of them say they’re living vicariously through me. They say I’m living the BBQ dream.”

You can find the Bigmista’s Restaurant campaign here.