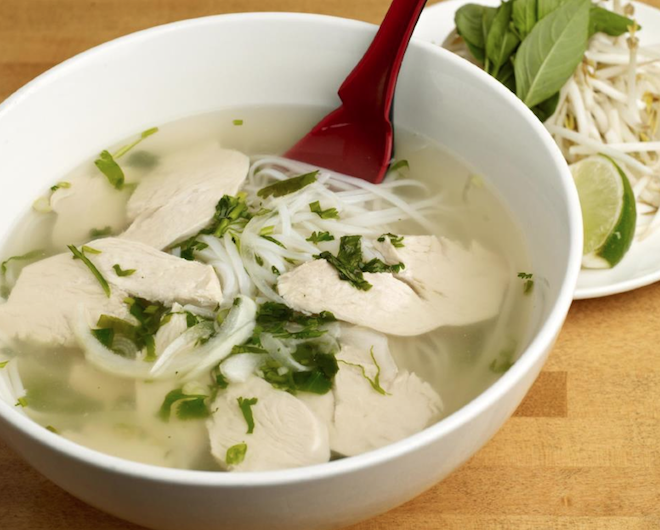 On a recent weekday evening, Kimmy Tang’s face was lit up with a sly smile as she wandered out from the kitchen to greet guests at her modern casual Vietnamese restaurant, 9021Pho. The four-year-old eatery has slowly garnered a loyal and repeat clientele in its time on North Beverly, between the constant traffic on South and North Santa Monica Boulevards. She’s wearing bright pink, which she explains thusly, “I like color! I’ll never wear a white chef’s coat. My tailor called to ask me what color I want to do next and I said Royal Blue! Or maybe purple!” The chef’s tendancy towards color translates into her cooking.

Every dish is constructed so that it contains a balance of flavor, color, and texture—it’s a sort of yin and yang style of cooking familiar to those who love the cuisines of East Asia. There’s a spot of green, red, and white on every plate, from the namesake pho to the pâté-laden bánh mì sandwiches. New on the menu, nuggets of faux chicken pass as the real thing thanks to a chili-scented peanut sauce and flurry of vibrant scallions. Mei-nam noodles combine curry, sprouts, eggs, chicken, and shrimp, though it’s the julienned red pepper that alights the plate.

Flavorful dishes like these have put Tang on a path to regional and national expansion. Thanks to new investments in the business, she’s opened three additional L.A. locations (Sherman Oaks, Glendale, Westlake Village) and has no plans to stop there. Next up is a location at 7950 Sunset, set to open in December. After that, another will open in Westwood Village next March. And finally, an entirely new concept, a sort of 9021Pho 2Go, will open next April at Wilshire and Normandie. That project is part of a larger chain of stalls meant for street food vendors; Tang’s will be the cornerstone stall.

Though locations are also planned for New York and beyond, the mild-mannered Tang will no doubt stay true to her roots. She credits her energy and youthful good looks to her mother. The 94-year-old Mrs. Tang still makes breakfast for her daughter each morning. “My mom’s cooking is my secret,” chef Tang says, with a wink.