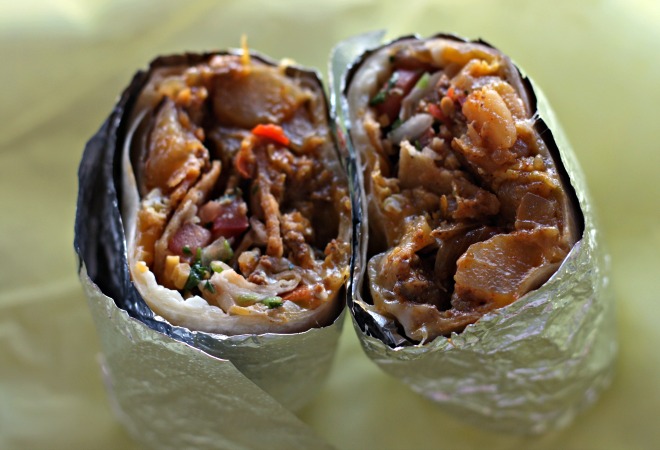 Cofax, the slick new Fairfax District coffee shop from the owners of Golden State and Bludso’s, is dedicated in part to L.A.’s iconic baseball franchise: The building’s facade is painted Dodger blue, a Brooklyn-era team logo is stenciled on the window, and a wobbly Sandy Koufax bobblehead sits on the counter (the shop’s name is also a clever portmanteau of “coffee” and “Fairfax”).

Now, the shop is paying homage to another L.A. icon: the breakfast burrito.

Although Cofax had been serving Donut Snob doughnuts and Stumptown coffee for the past month, there has been palpable anticipation for its breakfast burrito, an item that co-owners Jason Bernstein and James Starr first hinted at during opening.

It turns out that excitement was well-warranted. Cofax’s breakfast burrito ($6.50)—stuffed with smoked potatoes, chorizo, cheese, and eggs—is the gooey, tortilla-wrapped equivalent of a perfect game.

The magic begins a few blocks east on La Brea, where Bludso’s pitmaster Noah Galuten smokes potatoes in a well-seasoned barbecue smoker, adding a subtle but distinct savoriness to what is usually a bland burrito filler. Also inside: chorizo sautéed with onions, soft scrambled eggs, crushed tortilla chips, fresh pico de gallo, and a thin blanket of melted cheddar cheese. There’s a vegetarian version available too, preapred sans chorizo, and Galuten hinted that adding avocado or bacon may soon be options as well.

Not too large or too small, Cofax’s burrito achieves a Goldilocks-level portion that’s both sturdy and managable. Galuten admits that a solid amount of “breakfast burrito research” happened prior to opening, and the results were enlightening. “Even the bad ones we’re pretty good,” says Galuten, “but we went for something that has a little more flavor.”

The real X-factor for this morning indulgence, though, is the duo of salsas that come inside the bag. Both are housemade, one an earthy salsa roja made from fiery red chiles and the other salsa verde made from tangy smoked tomatillos.

Starting next Monday, the burritos will be available every morning at 8 a.m. until they sell out. Which, judging by our experience, won’t take very long.