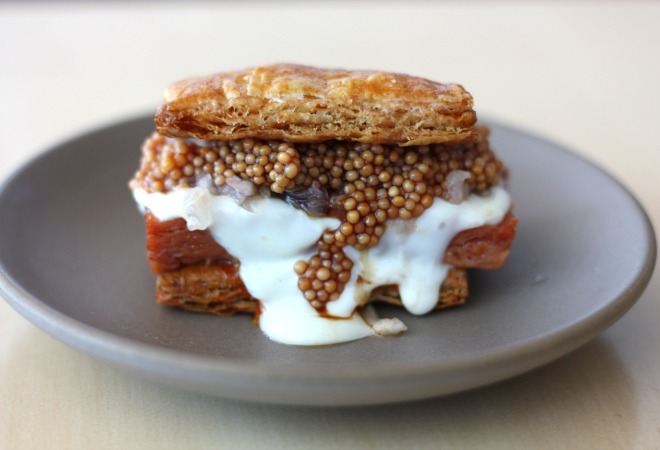 When Zach Pollack worked as a chef in Verona, his long shifts in the kitchen would usually be followed by a visit to a piadinerie, local street kiosks hawking wide Italian flatbreads called piadina, stuffed with fresh cheese, prosciutto, arugula and then grilled. “It’s basically the Italian equivalent of a huge quesadilla,” says Pollack.

That late night memory stuck with the 30-year-old chef when he began designing the menu for Alimento, his new Silver Lake Italian restaurant that’s quickly turned into a neighborhood favorite. As a rough ode to the piadina, he created the “Pigs in a Blanket,” ($11) a messy finger sandwich made from two flaky sheets of spelt flour pastry, a thick wedge of pressure-cooked Italian mortadella, gooey Stracchino cheese, tomato jam, pickled mustard seeds, and a shredded turnip sauerkraut called brovada. “I never thought I would serve something called pigs in a blanket, but the name just fit,” says Pollack with a laugh.

Though it might look small, this ultra-rich stack packs a ridiculous amount of flavor. “The spelt pastry is laminated with a lot of butter and the tomato jam is pretty sweet.” says Pollack. “The vinegar in the brovada and pickled mustard seeds cuts the richness just enough.” He recommends splitting the dish with another person, but most patrons, it seems have a hard time sharing. In fact, almost every table seemed to contain at least one pigs in a blanket during a recent visit (the dish is second only to the chopped salad in popularity—this is L.A., after all).

Is it a bit strange that one of the most hyped dishes at an Italian restaurant is named after an all-American comfort food? Pollack doesn’t think so. After all, many of the restaurant’s dishes, such as his chopped salad with chickpea pureé and the broth-filled “tortellini en brodo,” don’t appear to be strictly traditional, but each has roots in the traditional flavors and experiences the chef encountered during his travels through Northern Italy. “I’m just tinkering with the medium,” says Pollack.