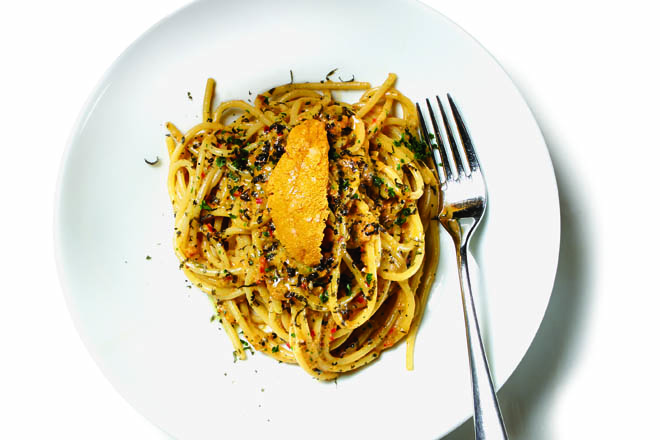 You know a place is popular when you find yourself accepting conditions you’d normally laugh off. Like when I tried to reserve a table at Bestia and was told they could seat my party of four at a communal table—provided we were no more than 15 minutes late and agreed to vacate within 90 minutes. Did I get huffy? Of course not. That’s just the way it goes at the hot spot restaurateur Bill Chait and chef Ori Menashe opened four months ago among the warehouses on downtown’s far eastern edge. The old loading bays sport windows now, butcher block tables crowd the bar area, and meat hooks hang amid the lighting fixtures throughout the depot-size space. In the open kitchen a bandanna-wearing crew is a blur of activity as it relays its smart organ-filled interpretation of la vera cucina to a waitstaff in black T-shirts. RivaBella, the new Italian restaurant headed by Menashe’s role model, Gino Angelini, might as well be on another planet. Sure, you’ve got to reserve ahead of time, but while Bestia plays up the building’s rough-hewn past, RivaBella, located near the west end of the Sunset Strip, resembles the playpen of a Fiat heir. In the main dining room a retractable see-through roof floats above white-cushioned booths, a freestanding brick fireplace commanding the center. An adjoining room, clad entirely in brick, hunches beneath a domed ceiling like a Roman catacomb, while pictures of an Edwardian travel journal punctuate the walls of a third. A waiter in an Adriatic blue work shirt ferries a tray of bellinis; a young woman with a studded Kelly bag scans the volume of Slim Aarons photos in the waiting area by the bar. This is the place to point the Fisker Karma toward after a long day.

An unaffected presence in kerchief and angled cook’s cap, Angelini pretty much sets the benchmark for every Italian chef in town, effortlessly spanning the arc from farmhouse to palazzo. In the spare confines of Angelini Osteria, the beloved dining room on Beverly Boulevard where Menashe worked under him for years, the Rimini native showcases a decidedly unfussy rendering of the Italian culinary arts. Offerings like kidneys with gravy and mashed potatoes, skate wing with a sprinkling of salt, or the carved-from-the-bone veal shank stinco, have an almost sushi-like simplicity to them, and for good reason: Trained in the grand hotels of Europe before overseeing the kitchen at the late Mauro Vincenti’s streamline mo-derne Rex Il Ristorante downtown in the late ’90s, Angelini is a chef who reaches expressive heights with even the most seemingly basic dishes.

Menashe is as able to express more with less, though not quite as loosely. Whereas Angelini at this stage of his career crosses genres with ease, happily taming pricey lobster at RivaBella with a moist couscous salad ringed by an earthy Sicilian pistachio pesto, Menashe is constantly focused on authenticity, as if to prove that this American-born Israeli’s version of genuine fare starts with keeping to the budget of a Puglian peasant. True to the restaurant’s name (it means “beast”), the one-page menu is replete with innards and the lesser cuts of meat you’d get at the most modest storefront eatery in Romagna. In case you think it’s some gimmick, just taste the chicken gizzards that he confits, then sears to a crisp before presenting them on a tangle of endive and roasted beets that has been drizzled with sherry, red wine, and mustard vinaigrette. A superb appetizer of beef heart tartare is unexpectedly delicate, the sharpness of champagne vinegar tempering the robust flavor of the meat.

Menashe uses braised cabbages and chard to cut through the richness of the cassoeula milanese, a potent broth (and first cousin to Vienna’s tafelspitz) in which hunks of tender braised pork and veal ribs bob alongside sausage that’s as pliant as liverwurst. He rubs the skin of the orata, a fish from the Mediterranean and North Atlantic, with anchovy and lemon paste while it’s on the grill to accentuate the char. Tossing dandelion leaves over the fish (served whole) before serving shows a real sensibility for those herbaceous, undomesticated greens; unlike generic vine-ripened tomatoes drowned in balsamic, they’re an integral part of the Italian flavor wheel.

Angelini would approve of the dexterity. If Menashe’s mentor flirted with high-end Italian at La Terza, an ill-fated spot on West 3rd Street, RivaBella is a full-on embrace. It’s the latest addition to the string of hits from Innovative Dining Group. Masters of the theatrical flourish, IDG, which brought Angelini on as consulting chef, has ditched the black palette that connects its many restaurants, from Sushi Roku to Katana to Boa Steakhouse (a branch of which is nearby on the ground floor of the Soho House tower), in favor of an interior that you half expect Marcello Mastroianni to sweep across.

Angelini has altered his approach accordingly. You see it in small upgrades, such as the way he presents his chestnut soup in a porcelain tureen. At the osteria, an unadorned bowl suffices. And while truffles are an indulgence shaved over a lardo crostini on Beverly, on Sunset they’re codified in a $44 spaghetti dish that cradles their pungency in a nest of sausage and pasta. Probably more surprising to Angelini’s groupies is his joyful abandon with cream sauces at RivaBella. Clinging like a diaphanous coat to the variegated leaves of Castelfranco radicchio in a salad, the creamed Gorgonzola may well be the best blue cheese dressing on the planet.