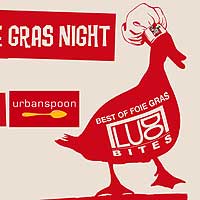 Last LudoBites, our livers! After rumors that Ludobites 9.0 in Hawaii might be Ludo Lefebvre’s last pop-up, we have the pleasure of announcing one more decadent engagement.

The five-course meal will feature all of Ludo’s most beloved and now ever-so-fleeting foie gras-based dishes including the foie gras croque monsieur that made its debut at LudoBites 4.0. Priced at $105 per person, portions of the meal’s proceeds will go to the Coalition for the Humane and Ethical Farming Standards (C.H.E.F.S.) which is working to overturn the statewide ban on foie gras that goes into effect on July 1.

Like Ludobites 8.0, reservations will be made using an Urbanspoon lottery system. The lottery will open at 10 a.m. on Friday, April 13 and close 24 hours later. Over the weekend, Urbanspoon will then let those lucky enough to score a spot the details of their reservation.

Here’s the link. We’ll (hopefully) see you there!