Home Summer Fun The 19 Best Places to Get a Michelada in L.A. 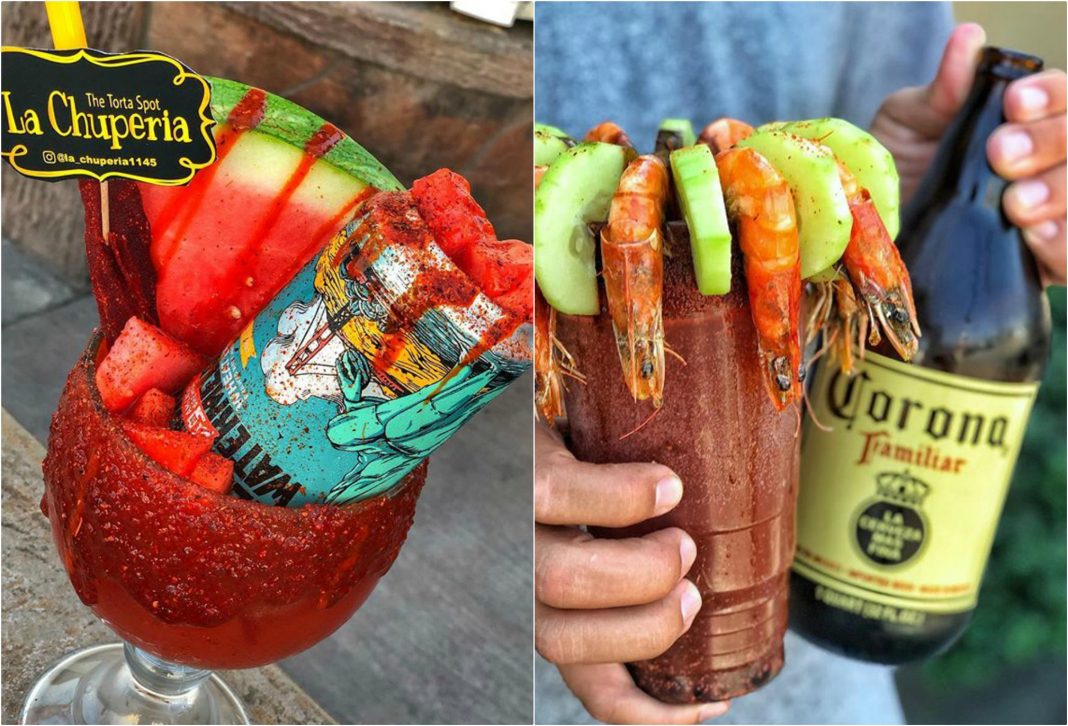 Whether you like your micheladas with Worcestershire sauce, Clamato, or a premade mix; a salt, chamoy, or Tajín rim; a lager or an IPA; spicy or mild—there’s no one right way to make a miche, and they’re all mouthwatering in their own ways.

The tomatoey beer cocktail is a summertime staple and a lower ABV alternative to the Bloody Mary. Depending on where you’re sipping one, they can range from simple to sophisticated to downright extra, piled with enough garnishes to constitute a meal.

Here’s a not-at-all-exhaustive sampling of 21 places in L.A. to visit the next time a miche craving hits.

With four different restaurants throughout Inglewood, the Martin family has been serving delicious food and mouthwatering drinks (like this michelada) for nearly a decade. At Fiesta Martin Bar & Grill on Florence, they serve both tamarindo and mango flavored micheladas that’ll leave your tastebuds wanting more. And if you do have more, they host karaoke and dancing on Friday nights. 300 E. Florence Ave., Inglewood.

Mariscos El Bigoton has become a seafood destination in the San Fernando Valley, East Los Angeles, and Wilmington—but you can’t have ceviche without a miche. El Bigoton sells superior michelada mix; all you have to do is B.Y.O.B. Multiple locations.

Salsa and Beer’s two Valley locations sling micheladas for the bargain price of $5 a pop, and they happen to pair perfectly with the restaurant’s irresistible bean dip. Pro tip: order your miche with Modelo Negra beer for optimal results. Multiple locations.

Hot take: some of the best micheladas are made with Golden Road Mango Cart beer. So hitting up the brewery’s O.G. pub in Atwater Village is sort of a no-brainer. 5410 W. San Fernando Rd., Atwater Village.

If you know, you know that La Chuperia has some of the best micheladas in town, served with a bottle of beer upended in the glass, a couple of shrimp, and chamoy dripping from the rim. 3742 S. Flower St., downtown.

Located in Van Nuys, Catch 818 Mariscos is a hidden gem in the Valley. Their micheladas are served in a mason jar (see, the Valley’s into #aesthetics too), and you can order them garnished with shrimp and a strip of carne seca. 7900 Woodley Ave., Van Nuys.

Billed as the “first michelada food truck” and as “home of the virgin and vegan miche,” Miche God is must-try. They primarily park in Sylmar, but you might see them elsewhere around town, and you can order ahead through Instagram. For the true miche connoisseur, they’ve got merch you can buy too. Located in Sylmar.

Las Perlas may be known primarily for its mezcal and margaritas, but the micheladas are some of the best in town. With an ideal combination of Worcestershire sauce, tomato juice, lime, and spice, the bartenders at Las Perlas always get their miches right. 107 E. 6th St., downtown.

If you’re not easily overwhelmed by choices, 20/20 Bar makes 50 different kinds of micheladas, including ones served in watermelons and pineapples. The so-called La Casa De Micheladas has locations in Downey and San Bernardino. Multiple locations.

Taco Nazo, which began as a lunch truck, has been serving the “world’s best fish taco since 1978.” Now they’re in the business of serving some of the best micheladas in L.A. With Corona, Modelo, Bohemia, and Dos XX on tap. Not every Taco Nazo serves beer, but the Bellflower, El Monte, and La Habra locations are great spots for a cold miche served in a Tajin-rimmed mug. Multiple locations.

Brace yourself for a hefty menu of miches. Open since 2014, Michelada Mix serves a regular miche, a cevichelada (a michelada topped with ceviche), a michelada with aguachile, a piña chelada, a michelada VIP, and more (their full menu can be found here). If you’re just looking to replicate their micheladas at home, they also sell their own miche mix by the bottle. 1665 N. Hacienda Blvd., La Puente.

Xelas serves a more subdued michelada—not loaded with a ton of Worcestershire sauce or Clamato, but still refreshing and delicious. And that rim! 1846 1/2 E. 1st St., Boyle Heights.

The salt-rimmed michelada at La Cita is in the running for the best and spiciest in L.A., even without Tajin on the rim. Order it with a cold Victoria. 336 S. Hill St., downtown.

This James Beard Award-winning Oaxacan restaurant is an L.A. institution, so it’s no surprise that they have some of the best micheladas in town. After all, they’re the same ones who brought us the I Love Micheladas mix (which comes in two savory, cirtrusy, and spicy flavors). 3014 W. Olympic Blvd., Harvard Heights.

They say “everything’s bigger in Texas” and apparently that applies to micheladas too. At El Tejano Tex Mex, come thirsty for their micheladas served in an 18-ounce schooner–and they’re only $8. 11122 W. Magnolia Blvd., North Hollywood.

If you want to try Toma Micheladas in Sylmar, all you have to do is “text for a michelada.” We’re not complaining. Owner of Toma and San Fernando Valley native Jonathan Leeh Melendez serves ceviche and his signature 24-ounce micheladas on Saturdays and Sundays only from 2 to 8 p.m. Mobile orders only.

You knew before you clicked that the micheladas from Dodger Stadium would be on this list. We don’t care if they cost more than a game ticket (just kidding, we care a little), the micheladas here are worth it. But in case you didn’t already know, you can B.Y.O.M.C. (bring your own miche cup or mix) to the Dodger Stadium–save yourself $20. 1000 Vin Scully Ave., Elysian Park.

RELATED: How Do Store-Bought Micheladas Stack Up? We Taste Tested Them to Find Out

How Do Store-Bought Micheladas Stack Up? We Taste Tested Them to Find Out