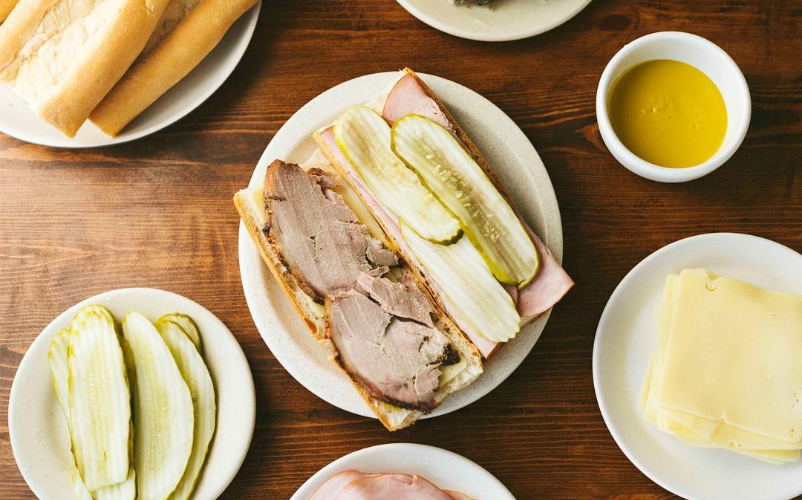 Located in a Sunset Boulevard strip mall between buzzy spots like Trois Familia and Fat Dragon (oh, and a Domino’s Pizza and Baskin-Robbins), family-run Cuban restaurant El Cochinito just earned major bragging rights—and a comically large trophy. Over the first weekend in April, El Cochinito joined restaurants from all over the world at the International Cuban Sandwich Festival in Ybor City, Florida (fun fact: as of the 2010 census, 70 percent of Cuban Americans lived in Florida), and walked away with a first-place finish in the traditional Cuban sandwich category. Through a nomination process, El Cochinito was selected to represent the entire West Coast.

Opened in 1988 by Gladys Gutierrez, who passed away four years ago and is the grandmother of the current owners, El Cochinito prides itself on its slow-roasted lechon asado. For the traditional sandwich competition, which was judged by a panel of Tampa-area chefs and local-celeb types, they had to abide by strict ingredient guidelines: Cuban bread, sweet ham, mojo-marinated pork, Swiss cheese, kosher pickles, and mustard. Butter was permitted, but only if the sandwich was pressed. The competition rules stressed: “No other ingredients can be used in the Traditional entry. Sandwiches may lose 10 points per rule violation.”

Daniel Navarro, who co-owns the restaurant with his mother and sister, says the win was “super overwhelming.” “When they announced the second-place winner [Las Iguanas, a South American restaurant in London] we were like, oh man, I can’t believe we didn’t win anything,” he recalls. “Then they called our name.”

RELATED:  In Search of the Cubano, From Havana to Tampa to L.A.

The Best Cuban Restaurants and Cafes in L.A.