Home Dining The Best Cuban Restaurants and Cafes in L.A. 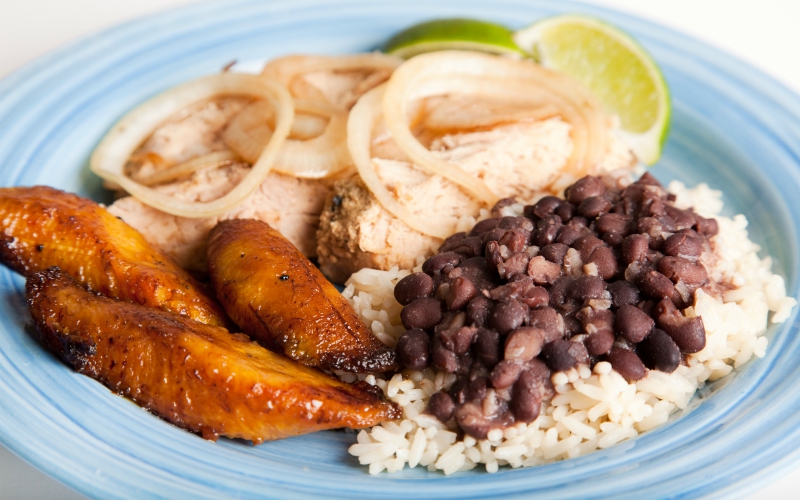 Cuba just got a new leader and that has us thinking about the island nation. While a trip there remains a little tricky for American citizens, legally speaking, at least we can get a bit of Cuban flavor right here in Los Angeles at these eight delicious spots.

A post shared by VersaillesCubanFood (@versaillescubanfood) on Mar 25, 2019 at 3:15pm PDT

Versailles is probably the first (if not only) restaurant most Angelenos name when they think of Cuban food. Founder Orlando Garcia was already making a name for himself as a young chef in Cuba before moving to L.A. in 1967. He started a series of restaurants here, his son eventually joined the family business, and now there are three locations around the city serving up reliable favorites. 1415 S. La Cienega Blvd., Pico-Robertson. Other locations in Culver City and Encino.

With a full bar (with no fewer than 11 different mojito variations on the menu) and live Cuban music on weekend nights, Havana Mania is a lively scene. The lengthy food menu does have some, let’s say, “pan-Caribbean” dishes that aren’t specifically Cuban, but they only augment an extensive selection of more traditional options, from vaca frita to masas de puerco. 3615 Inglewood Ave., Redondo Beach

La Cubana’s dining room might be unassuming, but it’s what comes out of the kitchen that counts, right? And what comes out of the kitchen here, is a greatest-hits list of classic Cuban dishes done well enough to inspire a loyal following. Choose the spicy oxtail dish rabo con picante, try a Cuban pot roast, or stick with an order of camarones al ajillo. 801 S. Glendale Ave., Suite 3, Glendale

El Cochinto just took home the trophy for best Cuban sandwich in the world, which is obviously a pretty big deal. Put it to the test yourself when you slip into this cute Silver Lake cafe. While the space recently got a fresh, Instagram-ready makeover, the family behind the restaurant has been at it for 30 years. Along with your sandwich or paella, you can enjoy one of several Cuban coffee options or a selection from a new list of small-producer natural wines. 3508 W. Sunset Blvd., Silver Lake

There is pretty much always a line at Gigi’s. Settle in and just remind yourself that at least the wait is probably less than at Porto’s. Your patience will be rewarded with an assortment of sandwiches, hot dishes, bakery items, and potato balls that inspire intense devotion. 2200 W. Temple St., Westlake

For years, Ruben Valenzuela worked in the kitchen of L.A.’s long-running Cuban restaurant El Colmao, before opening his own place in 1998. At Havana Club things are a little more modern, and in addition to the lengthy main menu, Valenzuela offers an assortment of rotating specials, like the lechon con moros y yuca, only available on weekends. 3831 Peck Rd, El Monte

This gorgeous downtown coffee shop by Don Fancisco’s also offers a full dining menu of sandwiches and plates that draw from the family’s Cuban and Basque heritage. Start the day with a slow-roasted pork and plantain hash on a Cuban bun, or come back for lunch or dinner to enjoy a media noche or pollo al ajillo. 541 S Spring St., Unit 124, downtown

These 9 Local Chefs Are Helping Make L.A. a Dining Destination