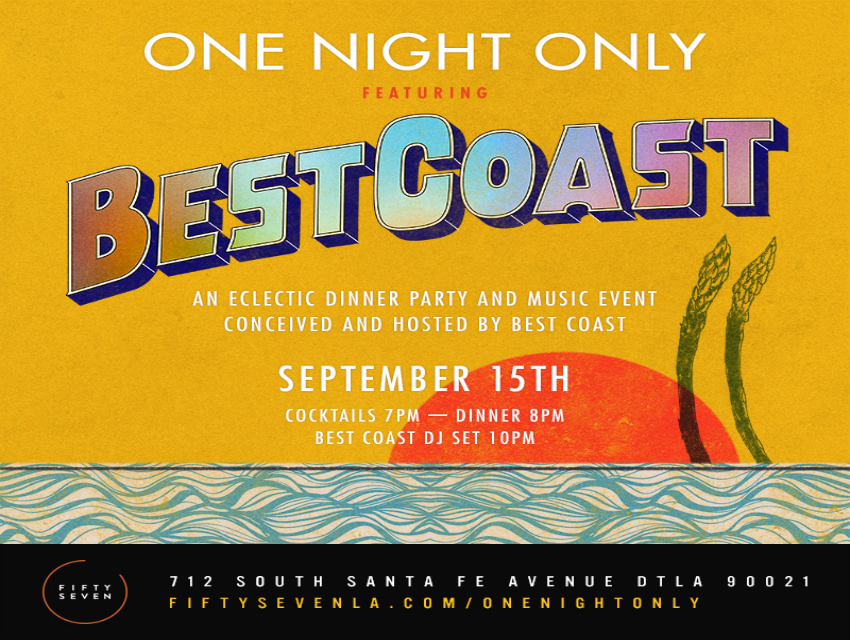 It was only a month ago that Fifty Seven in Downtown’s Arts District—now run by Josh Drew after David Nayfeld’s stint came to a close—announced its series “One Night Only: A Dinner with…” a promising set of collaborations with the Fifty Seven team and hot-shot chefs Flynn McGarry, Jesse Barber and Nyesha Arrington. The parameters of the dinner series made sure to include “creative types” as well as chefs, which explains why the Los Angeles-based band Best Coast will be next in line to throw a dinner event Monday, 9/15, featuring a live DJ set in the restaurant’s secret showcase room downstairs after the meal.

Bandmates Bethany Cosentino and Bobb Bruno are working with Josh Drew to create several eating stations, and they have also been in discussion with the restaurant’s mixologists for cocktail pairings (hint: there will be Mezcal, a favorite of Bruno’s). The idea in mind is to present more polished versions of the food Best Coast encounters on tour. You’ll see things like maple flatbreads, fried mozzarella with preserved tomato, rice fritters with dried pear, and burnt scallion with pork belly and romesco.

The connection between music and food, Cosentino explains, is a strong one for the band. “I can associate specific foods with different records we’ve made,” she said. “When we recorded at Capitol in Hollywood, we ate at Loteria Grill…when we recorded in Echo Park, Bobb started bringing in these salted caramels from Little Flower Candy Company in Pasadena…for our third record, we ate from this place called RoRo’s everyday.”