Home Dining The Best Chicken Sandwich in L.A. That No One’s Talking About 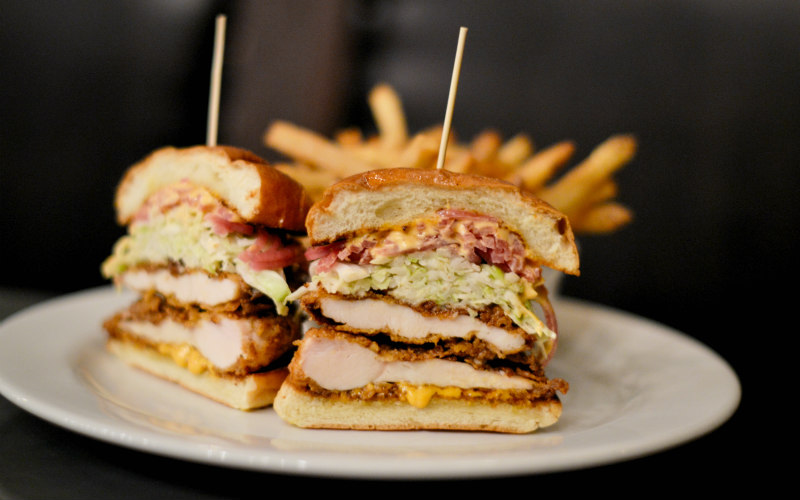 Photograph by Natalie B. Compton

Tom Bergin’s was, is, and presumably always will be one of the best places to drink. You sit in the dark at the dark wood bar and drink your dark liquor in peace, floating in and out of conversations with strangers about how the Rams sold out their future for a Hollywood-friendly draft pick, or how America’s response to the Syrian refugee crisis has so far been inadequate.

I never even thought to order food. I assumed it was the typical fare of an Irish pub that opened 80 years ago: Oil-logged fish and chips, floury beef and ale stew, some obligatory potato skins that were meant to “modernize” the menu but instead make you beg for TGI Friday’s or death. We’ve all been there.

I wasn’t happy to end up at Tom Bergin’s at noon on a bright, shittily hot Tuesday for a coworker’s birthday lunch (happy b-day Joe!). Seeing your favorite bar in the light of day is like seeing a retired athlete you used to respect getting the dumbest questions wrong on celebrity Jeopardy. I ordered a fried chicken sandwich and fries and I was totally prepared to choke down mediocrity with a smile on my face and repress the memory.

In all of my years of eating, I have never been more blown away by a meal. The fries were the platonic ideal: Medium cut, skin still on, double-fried so the inside was perfectly pillowy and the outside was perfectly crispy. They’re the fries that fancy French bistros like Terrine or Rèpublique try so hard to achieve but often end up falling short because it’s hard to keep tabs on the cook working the fry station while you’re slicing up hamachi crudo for dinner service.

RELATED: 17 Fried Chicken Sandwiches You Have to Eat Before You Die

The fried chicken sandwich—heavily brined and snapping with salt and spice and crunch under the soft sheen of brioche—was one of the best fried chicken sandwiches I’ve ever had, and I’ve had a lot. The bun was toasty and the vegetables were cold and crisp and the chicken was pulled out of the fryer at just the right moment and it was all served to me so fast that none of the individual ingredients threatened to lose integrity and reach thermal equilibrium. It was like someone in the kitchen made it with me and only me in mind, and I felt so special. I felt loved.

Ask any foodie (using that term deliberately) about the best chicken sandwich in L.A., and most will point you towards Son of a Gun, or at least they would have before Howlin’ Ray’s opened. It’s the OG. It’s probably the most influential fried chicken sandwich in America. It started the trend, and Tom Bergin’s sandwich followed the hot sauce mayo, slaw, pickle, squishy bun formula that Son of a Gun laid out about five years ago.

I ate the Son of a Gun chicken sandwich the week before going to Tom Bergin’s, and it was unrepentant trash. The chicken at Son of a Gun was cold, it was unevenly cut, and whoever’s job it was to salt the food must have been on a cigarette break out back. I skipped mad and went straight to sad. I’ve been a Jon and Vinny fanboy since I first went to Animal when I was 18—how could they take a complete shit on my loyalty? How could they make me feel so unwanted? What was it about me or the way I presented myself that made me so undeserving of properly seasoned chicken and human attention?

It’s easy to get caught up in chasing down new restaurants, or hyped restaurants, or restaurants that you don’t think you’re cool enough to get into because you probably aren’t and you’ll probably be treated that way. Sometimes you forget a pub down the street from your office—a place where you go to drink liquor alone—can absolutely blow your mind, palate, and sense of self-worth with a chicken sandwich.