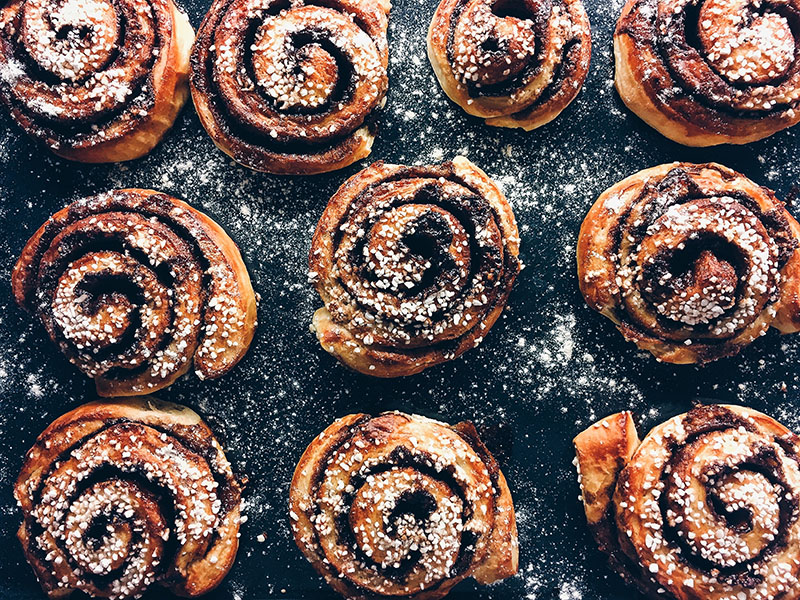 Photograph by Otto Norin via Unsplash

We’re convinced that bread-making videos and pastry glamour shots are the best (and cheapest) form of therapy. If you’ve never watched a bread-kneading clip or a dough-folding tutorial, prepare to enter a beautiful world of meditative bliss. Whether you’re a seasoned baker or newbie in the kitchen, gluten-free or carb-obsessed, we promise some baking visual therapy will do you some good. We rounded up our favorite L.A. bakers and pastry chefs on Instagram to give your feed a soulful, heart-warming treat.

There’s a high chance that you’re already following Garry Larduinat, the pastry chef of Wolfgang Puck Catering, who boasts nearly 200k followers on his Instagram. The celebrity chef is best known for his whimsical and intricate pastry designs, some of which seriously veer into the world of high art. Don’t be surprised if you catch yourself staring. His feed is a thing of beauty.

Bub and Grandma‘s Instagram lives up to their absurdly sweet name. Visit their profile for heart-warming loaves and an intimate look into their lovable team. You’ll want to join their baking fam. And you’ll want another bite of that barbari bread.

We’ve been obsessed with Nicole Rucker for quite some time now. She stole our hearts at the Good Food Pie Contest years ago with an ungodly pork pie, then stunned us with her bagels, baklava and signature pies at Gjusta, and continues to wow us with her inventive treats as they pop up all over the city. If there’s a baker to keep on eye on, it’s her.

Prepare for an overdose of perfectly charred loaves and spongey, cross-sectional close-ups. Lodge Bread Co. definitely embraces a darker crust, and their photos will leave you severely craving that satisfying crunch. Their official hashtag is #livefreeandbake—but why would we do that if we could #livefreeandeatLodgeBread.

Joan’s on Third is a feast for the eyes, both in person and on their Instagram. The L.A. institution is a must-follow for your daily dose of pastry, bread, and cake photos.

You knew this was coming. We hope you’re already following Jessica Koslow and company.

Roxana Jullapat is the co-owner and pastry chef of East Hollywood’s Friends & Family. Her Instagram gives you a glimpse into the madness it takes to run a business, alongside wonderfully meditative bread-making photos and videos. It’s the perfect balance—right before you find yourself daydreaming about quitting your job and becoming a baker, she’ll slap you in the face with a this-shit-is-hard post. We’ll leave it to the passionate pro and savor her genius from the other side of the screen.

Kriss Harvey’s feed tends more towards chocolate-making these days, but as the former executive pastry chef of the Bazaar by José Andrés, he’s doing bit of everything. We’re fond of his iconic Dark Side of the Macarons and picture-perfect canelés, but can’t wait to see what kind of magic he creates as a chocolatier.

As the executive pastry chef of the Beverly Wilshire Hotel, expect a stream of perfectly polished pastry shots from Chris Ford. His feed gets especially exciting around the major holidays—think eight-foot-tall gingerbread houses for Christmas and life-size chocolate ducks for Easter. His creations are works of art—the fact that they’re edible almost feels like an extra perk.

I fell in love with Clara Polito’s pastries after first trying her Butterfinger cupcakes at Pizzanista!. Little did I know that she was a teenager at the time. Annnd to top it all off, everything she bakes is completely vegan, leaving me all around stupefied. Her Instagram is a collage of decadent close-up shots and a daily reminder that age ain’t nothing but a number.

Colleen DeLee is a one-woman powerhouse. The self-taught baker is responsible for creating what we’ve crowned the best baguette in the city, which is no easy feat. But don’t just take our word for it—chef Ludo Lefebvre swears by Colleen’s baguettes, claiming her salty loaves are among the secrets to his success at Petit Trois. The only other place to snag her loaves outside of Ludo’s bistro is the Cheese Store of Beverly Hills. Get a peek of her bread-making prowess by giving her a follow. She’s also a raging Dodgers fan, so expect some stadium snaps alongside drool-worthy bread photos.

Zach Hall of Clark Street Bread is as savvy in the kitchen as he is on social media. The young baker knows how to take the perfect ‘gram—from beautiful baguette flat lays to croissant close-ups, we dare you to scroll past one of his shots without double tapping.

So, Kate Pepper is technically based in Ojai where she runs her home-based, small-batch bakery called Kate’s Bread, but her bread-filled Instagram is too good to not include. If you’re lucky enough to be in the Ojai area, you can snag one of her loaves at the Ojai and Ventura farmers’ markets or swing by local spots around town like Farmer and the Cook. Allegedly, the owner of Lodge Bread Company is one of her biggest fans, so you know she has some serious bread cred.

RELATED: Meet the Man Behind One of L.A.’s Best Food Instagrams