Home Dining What Makes Some of L.A.’s Best Al Pastor Tacos So Good? 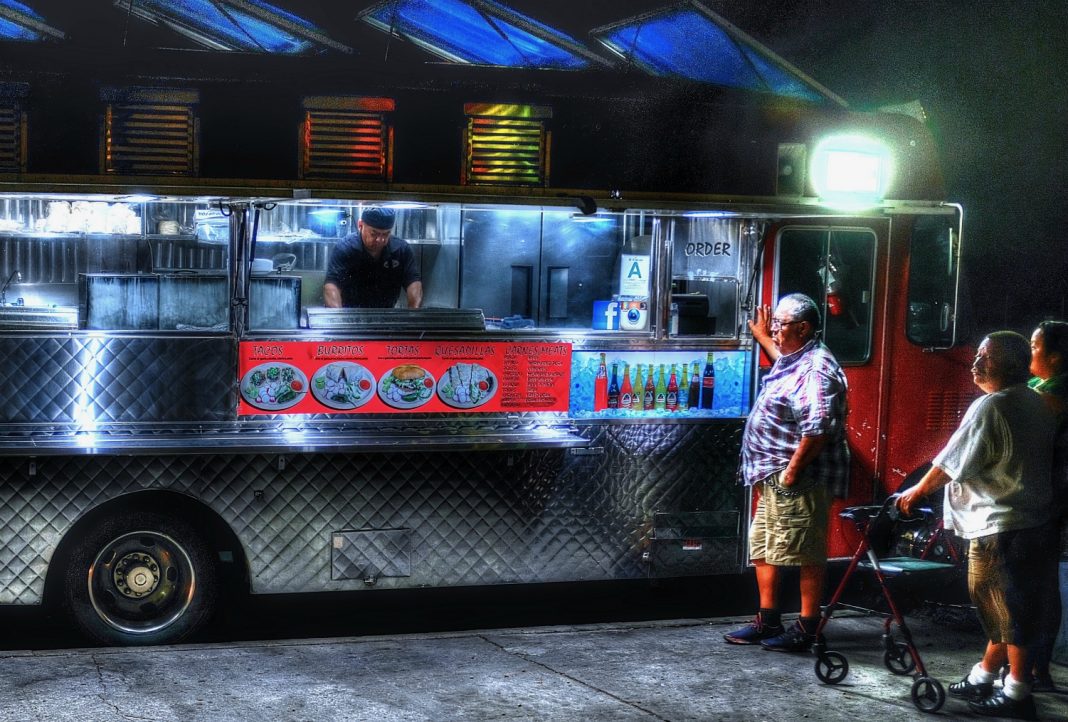 Seven years ago, in a part of the West Valley I didn’t know, I was hungry. Waiting at a stoplight, I saw people lined up at both a strip mall taco joint and at the taco truck parked in front of it. I had not had dinner so, on a whim, I pulled in. I asked the guys in line in front of me what was good. They smiled as they imparted their wisdom: “The tacos al pastor are the best here. Everything here is good but those tacos are amazing.”

I ordered a plateful and took my first bite of the saucer-sized corn tortilla piled with diced marinated pork, thick reddish-orange hot sauce, onions, cilantro and a squeeze of lime. The crispy, spicy, juicy pork kicked me in the taste buds. The spice from the chiles hit the front of my tongue and then the back of my throat; intense, but just this side of too much. I stared at the taco in my hand and wondered how a soft, store-bought tortilla with just a few ingredients could pack such flavor.  I’ve eaten countless tacos al pastor at Tacos Reyes in the years since, and I physically crave them if it’s been a while. I’ve got to get my fix.

The idea of meat on a spinning vertical rotisserie is found in food cultures around the world. In Turkey it is dönor kebab; in Greece it is the basis for the gyro; and in Lebanon it goes by shawarma. The name taco al pastor (“shepherd’s taco”) refers to the fact that it was once made with lamb. But Lebanese immigrants in Puebla, Mexico, in the 1930s switched out lamb for pork on the vertical rotisserie called a trompo (“spinning top”) and soft tortillas replaced the thicker traditional pita bread. Though this fusion cuisine was born on the streets of Puebla, it eventually spread to Mexico City and beyond.

Tacos al pastor are the ultimate street food: portable, delicious, and affordable. I’ve eaten them from trucks and carts, in small restaurants, on sidewalks, and behind gas stations. The outward appearance of the location is in no way indicative of the ultimate deliciousness of the taco. It’s not unusual around L.A., on a weekend afternoon, to see roadside tables equipped with a carefully balanced, slowly spinning trompo. I like exploring the variations but ultimately they end up making me miss the perfectly spicy, addictive Tacos Reyes version that first hooked me.

But there was still another aspect to this taco-driven obsession nagging me. What was it exactly that made this al pastor shine and was it something I could recreate in my own kitchen? I decided to try and find out. Ana Relles, the manager of the brick and mortar Tacos Reyes location in Canoga Park, was willing to help me on my quest towards enlightenment.

Ana’s father, Francisco, started Tacos Reyes with his brother, Miguel, nearly 20 years ago. They were butchers from Guanajuato, Mexico, and they began selling tacos from a cart in Van Nuys. Business was OK but Francisco was not satisfied with the tacos. He asked his family in Mexico to help him find various recipes for al pastor. Then he experimented with the spices and developed the adobo that he has used ever since. As his tacos improved, so did his business. The brothers’ cart became a truck and eventually the three trucks and one restaurant that they currently operate in the San Fernando Valley.

Asked why these tacos are so addictive, Ana does not hesitate. “I think it’s really all of the spices that my father uses,” she says. “He’s a big spice guy and he feels the more spices, the better.”

The exact recipe is a closely guarded secret. “My father makes [the adobo] himself—nobody else who works with us is allowed to make it,” Ana says. “So for all of our locations, we use the same adobo that he makes.”

While unable to give away the secret family recipe, Ana is willing to give me some tips. She tells me that the adobo is key and the pork needs at least 24 hours to marinate. You need enough fat in the meat (they use diced pork shoulder) to pull off both crispy and juicy. While there is pineapple in their adobo, Tacos Reyes does not top their taco with pineapple like some places.

Ana takes me into the kitchen and has one of the cooks give me a demonstration. The diced pork simmers on a flattop while he warms tortillas to one side. The meat and onions get scooped up into a tortilla with the fast, practiced moves of a man who does this many times each hour. He finishes the taco with a sprinkle of cilantro and a dash of the hot sauce. When asked what’s in the sauce, Ana smiles. “It’s a habanero sauce that’s my mom’s secret family recipe,” she says.

I notice that there is no trompo in the kitchen and ask why. “We used it at the beginning because it was more authentic but it’s harder to keep the meat fresh if you are not going through all of it in one day and it dries up.” Ana asks if I would like the taco that the cook has just made. They’ve got me hooked, how can I say no?

It turns out that making tacos al pastor from scratch is a multi-day adventure. Like Francisco Relles before me, I first researched a number of different recipes and pulled together a greatest hits version, combining ingredients and techniques. I roasted the chipotle, ancho and pasilla peppers and made my own adobo. It was bright red, earthy, and spicy. A dash of pineapple juice added to the flavor and apple cider vinegar gave it additional brightness and acidity. I marinated it for 24 hours as they do at Tacos Reyes.

Instead of a trompo, I used Kenji Lopez-Alt’s brilliant hack of layering sliced pork loin in a loaf pan with bacon and roasting it for hours in a low temperature oven. The smell of the pork and bacon roasting in adobo was intoxicating. When it was done in the oven, I let it cool then chilled it overnight. I then thinly sliced this meatloaf-shaped Frankenstein creation and fried it in some of the adobo oil and fat left over from the roasting. As for the tortillas, I decided make them from scratch using some of the adobo-infused pork/bacon fat from the loaf pan in the dough. The tortillas were spectacular: thin and silky with deep porky and earthy chile flavors.

After filling the fresh tortillas with the now crispy al pastor meat and topping them with diced white onion and cilantro, I added a splash of a commercial habanero hot sauce and a little diced pineapple on top. I tried my version alongside tacos al pastor I had picked up that morning at Tacos Reyes and reheated.

My tacos were good—better than many I had tried around town. While my tortillas had better flavor and texture than the store-bought tortillas at Reyes, the commercial habanero sauce I used did not come close to the subtle spicy magic of Ana’s mother’s recipe. My tacos had a lot of flavor but the Tacos Reyes version still won out. Despite my research and the helpful tips, the masters still surpassed the student.