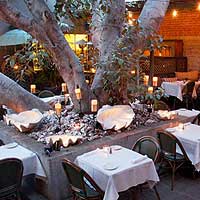 Silver Lake’s most atmospheric dining spot may finally have a menu that lives up to the setting. Benjamin Bailly has been named the new executive chef at Cliff’s Edge restaurant.

Bailly, who hails from France, cut his teeth working for giants like Alain Ducasse and Joël Robuchon and made a name for himself locally as executive chef at Petrossian West Hollywood and ever so briefly at Culver City’s Fraîche. His new menu skews Mediterranean, with dishes like eggplant caviar, skate wing with brown butter, lemon, and capers, and crispy polenta with mushrooms, Pecorino Romano, and a sunny side up egg.

Tucked away off Sunset Boulevard, Cliff’s Edge has stayed busy over the last seven years largely due to its gorgeous, terraced courtyard beneath an enormous tree dripping with lights. The food, however, has struggled to keep up. Bailly marks a huge leap forward for the restaurant, which is owned by Silver Lake’s hospitality grande dame, Dana Hollister (One-Eyed Gypsy, Villains Tavern). Bailly has been manning the stoves since January 3. Thank goodness for heat lamps.