Home Uncategorized Behind the Scenes: Drunk History With Alie & Georgia 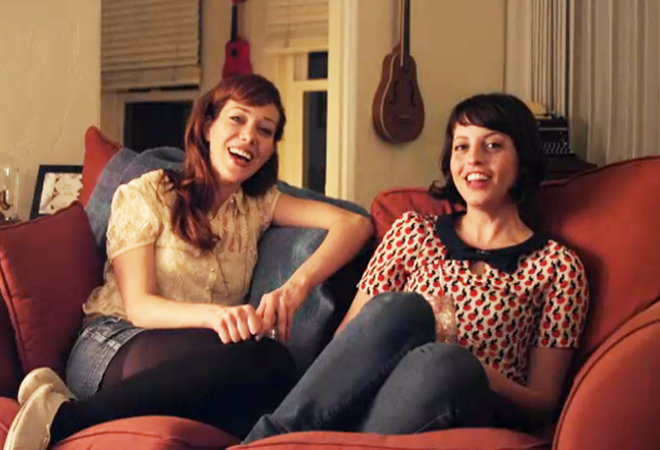 If you’ve always enjoyed those holidays by the fireplace when your history buff uncle got plastered off Jack Daniels and told you fun facts about World War II, then you’re no doubt already a fan of the Drunk History series on Comedy Central. Drunk History started back in 2007 as a Web series and just transitioned to television this year. And the show’s premise is so simple: a drunk narrator recounts a famous historical moment which is then reenacted by actors but still voiced by the drunk person. Hilarity, and vomit, inevitably ensues. If only my high school American History class was that fun.

Needless to say, I’ve been a longtime fan of the show, back when they still told you what the narrator’s liquor of choice was. And when my friends Alie Ward and Georgia Hardstark of the Cooking Channel’s “Tripping Out With Alie & Georgia” popped up on the “Nashville” episode (available on iTunes), well, I was ecstatic. Not only because it was the best Drunk History ever but I’d finally get to find out the backstory of an episode. I mean, how does anyone know THAT much about any historical event? And how much do they have to drink?

So I asked the girls and they spilled.

How did you get picked to do Drunk History?
Georgia: We’ve know Derek Waters (the creator and host), and Jeremy Konner, the awesome director, for many years. We have no idea why they picked us to do the show, although we think it has something to do with our eagerness, lack of shame, and the fact that they wanted more females on the show.

Alie : After our episode, they agreed that they were never going to use two people for the narrative again. Apparently us talking over each other was a nightmare when it came to the reenactment and the editing. Luckily our very talented friend Neil Mahoney did the editing for our episode, so it turned out great.

Does Derek Waters drink with the narrators?
Alie: He does, and we’re pretty sure it’s a scam to get you to feel more relaxed, which inevitably leads to drinking more than one normally would.

Georgia: Derek is an incredibly sweet guy, so you forget that his angle is to get the best performance out of you, which means to get you as drunk as possible. We have a feeling that “let’s do shots” is something that’s said a lot by him at the tapings.

What did you drink and why?
Georgia: We were going to be really smart about it. We bought a nice bottle of vodka and promised we’d stick to vodka sodas in order to drink “clean” and lessen a chance of barfing and/or having a hangover the next day. Three drinks in and that plan went out the window. We ended up raiding the contents of Alie’s very well, very weirdly stocked bar (when part of your job is testing cocktails, you end up with some odd bottles of booze).

Alie: We drank something called Jeppsen’s Malört, at the encouragement of Derek. It’s a very bitter liquor that people drink in like, the shipyards of Chicago to hairy-up one’s chest for the winter. By the taste of it, it might also be used to fuel lanterns or as an industrial cleaner.

How drunk did you get?
Alie: Let’s talk numbers: at one point I blew double the legal limit (0.16) and Georgia, to our recollection, blew 0.19. How do we know this? Because there was a medic on set to make sure that narrators are indeed intoxicated but are not indeed going to fall down dead in the middle of shooting.

Why do you guys know so much about Lewis and Clark? How much studying did you do?
Alie: We’re both history nerds so this was a really exciting, albeit scary project for us. Derek asked that we submit a few topics that we’d like to cover, and Lewis and Clark was chosen.

Georgia: We then had a couple of days to study the topic in depth so we were well prepared to tell the story. Basically you just need to know it well enough that you can tell it even when absolutely plastered.

What type of drunk are you?
Georgia: I start out super happy, playful and friendly, and then become argumentative and ornery. It’s not pretty.

Alie: I find that I talk even more—and louder—when I’m drinking, then I get annoyed that I’m drunk and kind of bitchy about it. Interestingly, after we shot I did some research on the effects of alcohol on the brain, and at about 0.16, euphoria turns to dysphoria. Shooting Drunk History was a valuable lesson in Why A Person Should Only Have Two Drinks Then Call It A Night.

How’d you like the way the episode turned out?
Georgia: I was so nervous the night the episode aired. I thought it would bring up all the embarrassment and shame I felt the days after we filmed, which honestly, it did a little. But moreso, I thought it was a really great 10 minutes of TV, and considering what an awesome show it is, and that it puts us in a very small, very talented group of people who have narrated, I’m incredibly proud to have been a part of the first season.

Alie: We filmed in January and it aired in August, so I spent 7.5 months cowering, just terrified of what would be included in the final cut. (My burping? Georgia and I drunkenly arguing about the Holocaust versus the displacement of Native Americans? The part where I pulled my shirt over my stomach and Honey Boo-Boo jiggled it?) When your expectations are so low and your terror is so acute, the result ends up being: pleasantly surprised that we and they pulled it off. I mean, considering.

There’s no official word on whether there will be a Drunk History Season 2 on Comedy Central but if there is I’d like to personally request an episode on Los Angeles. By the way, if you want more Alie & Georgia, catch them on their “Slumber Party With Alie & Georgia” podcast, available on Feral Audio and iTunes.