Home Uncategorized Behind the Scenes: Bar Rescue With Joseph Brooke 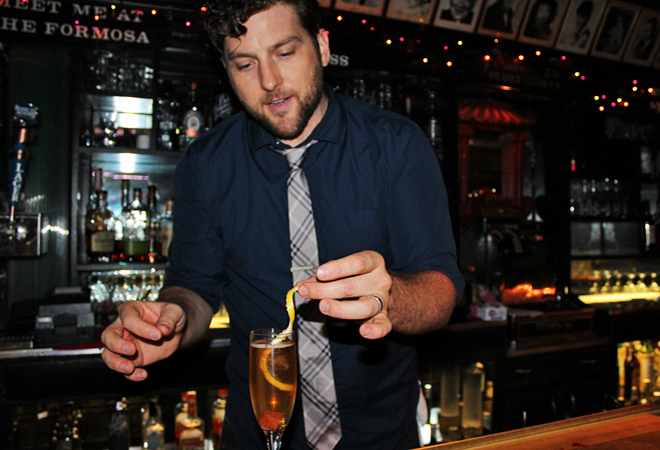 Why’d Joseph Brooke turn? He’s tended bar and created cocktail programs for some of the highest profile bars around town—Copa d’Oro, The Edison, Next Door Lounge, and Mixology 101—and was taught by the likes of renowned mixologists Vincenzo Marianella and Salvatore “The Maestro” Calabrese. But now you can find ol’ Joe behind the bar at L.A. landmark Formosa Cafe, which, gasp!, doesn’t even have a printed cocktail menu. However, the historic bar’s low-key atmosphere and chill-dive bar denizens have made him the happiest and most relaxed he’s been in a long time.

It’s funny considering his other gig is as one of the expert mixologists on Spike’s “Bar Rescue,” a reality TV show which helps transform old bars into shiny, new money makers. Not to say that the Formosa is in need of a bar rescue, although Brooke is looking into upgrading the soda guns. But there is none of the “mixology” that has made up most of his career. No barrel-aged this or infusion that. Which is just fine since he saves such fanciness for the show anyway.

Since “Bar Rescue” is my new guilty pleasure (I just got cable!), I naturally wanted to get some behind-the-scenes intel. What’s the grossest thing Joe’s ever seen in a pre-rescued bar? What was the hardest bar to turn around? And, does host Jon Taffer have an inside voice?

Joe obliged and answered my questions.

On the show as the expert mixologist you help host Jon Taffer save dying bars by redoing their cocktail programs. But how do you decide which cocktails work for each bar?
It’s a combination of a few factor—first and foremost, it’s a Diageo-sponsored program, so they’ll usually have a brand or two from their portfolio in mind to showcase for that specific episode. They’ll come to me with that/those brand/s and the concept for the remodeled bar, and I’ll send them about 10 drinks that fit the criteria, and we whittle down from there. Usually, Jon will have final say in the drink names and proportions, but most often times we’re on the same page with them.

Sometimes the bartenders at these bars lack basic bartending skills, what’s the first thing you teach them, what’s the most basic thing every bartender should know?
The first thing we learn, and constantly test throughout the training, are their free-pour counts. It’s unrealistic to convert that kind of a bartender to a proficient, jiggering one over a matter of days, so I learned very early on to avoid that pitfall. I assume the pressure of a) opening up a new concept while b) learning new drinks and new techniques all at the same time will mean they all are going to revert to their most basic instinct, which in most cases is their free-pour. If they can’t execute that properly, then they have absolutely no foundation upon which to build their technique.

Grossest thing you’ve ever seen behind a bar?
The indescribable excess of roach carcasses, casings and excrement that spewed forth after the (multiple) exterminations at Headhunters in Austin, Texas. I don’t think I’ve ever been so disgusted in my life, to the point where it legitimately had me scared. Even thinking about it now gives me the skin spiders. What made it worse was, they had to use an environmentally-friendly poison (?) because there was a pizza shop next door and a bakery directly above, and it smelled like wintergreen times 10. I fucking hate wintergreen.

Favorite success story?
Dual in Raleigh, North Carolina. Once we removed the “cancer[ous] bar manager” (not my words) and put in the new nightclub concept, they took it and ran faster than I’ve seen any staff run before. From what I gather from their Facebook updates, they’re absolutely killing it, and the owner is slowly climbing out of debt. We always give the owner and staff shit, but at the end of the day these cats were all super-cool. I’d like to head back there at some point, for sure.

Hardest bar you had to turn around? And why?
I’d say the hardest staff I had to work with was the one at Rocks, down in Laguna Niguel, and that’s really only because of one bartender in particular. Most times they’re starved for direction and training, but not in that instance. Another difficult one was Dimples, up in Burbank. we knew, at every step of the way, that the owner/hoarder [Sal Ferraro] was going to change everything back to what it was, no matter how good of a job we did. Even though it’s a skoch unrealistic to change the course of some of these bars over one week (especially when they’ve almost always been in a steady decline for years), you go into them hoping you can affect some sort of change that’ll stick with more than just the bartenders. Most times, it’s whatever these owners are already carrying with them that ends up torpedoing the reboot.

Any word on how Dimples is doing now?
Dimples has completely been reverted back to what it was, unfortunately. [Ferraro] won’t even let people choose their songs off of the machine we gave them. Instead, he sits directly in front of it and forces people to choose off of the ratty, awful binders he’s always used. It’s really a shame, but at the same time that’s something nobody can fix but him.

Does Jon Taffer really yell that much in real life?
Christ, I don’t know. I hope not? The only times I see him in real life is in between the yelling, so he’s very low-key in those moments. I’d like to think he gets all that shit out on set, and then goes home to a good book and a nice cigar. He’s definitely a big personality, though, and that can be polarizing to some people out there. You have to have that if you’re anchoring a show, especially a show like Bar Rescue.