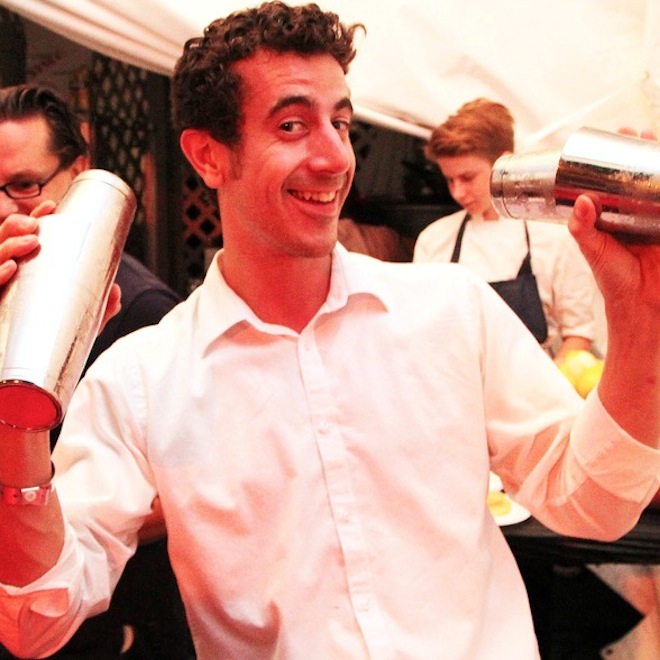 If we were giving out prizes for weirdest cocktail names, Ray’s & Stark Bar sommelier/barsmith Paul Sanguinetti would snag top honors with his “Smooth as Eggs” and “I Left My Wallet in El Jalisco” creations. Despite looking very much the part of a serious sommelier at a Patina Group restaurant with his suit and polished manners, Sanguinetti is down with the fresh rhymes and the ‘90s hip-hop slang. And he’s not afraid to incorporate those and inside jokes into his cocktail menu. (Just ask him what “Smooth as Eggs” got its name from. Go ahead… I dare ya.)

His sense of fun is carried out in the drinks themselves, which tend to impress, ranging from the booze-intense—try the “Dirty Harry,” made with scotch, mezcal, and Fernet Branca—to the fancy schmancy—like his “Silk and Gators,” concocted with cognac, 30-year sherry, Punt e Mes vermouth, and a Fernet rinse. I mean, this is his first cocktail program and he had started out as the sommelier at the LACMA restaurant but then took over the cocktail program after mixologist Michel Dozois’ departure in 2011. That’s straight-up dope, riiight? I can’t pull that off, can I?

Check out P-Dog’s answers to this recurring Q&A series on L.A. bartenders.

What’s a popular drink at your bar?
The “Kubrick Fashioned.” It’s basically an Old Fashioned with a spiced simple syrup of clove, nutmeg, and cinnamon and Miracle Mile Toasted Pecan Bitters and Forbidden Bitters. With shows like Mad Men it seems the general public is much more knowledgeable on Old Fashioneds and then you add “Kubrick” to the title and it sells like crazy. But then again, who doesn’t love a good Old Fashioned?

Where do you draw your inspiration from?
I draw in techniques from how food is prepared, seasonal produce, flavor combinations. I also look at cultural customs and food, whether they be Spanish, French, or Mexican. But ultimately for me, it’s about flavor, complexity, and understatement. I’ve been on a big “less is more” approach lately, as long as everything is well thought out and well prepared, with a great attention to the little details.

What’s the best night to go to your bar and why?
Tuesday nights, aka. “Killin ‘Em Softly Tuesdays.” It’s a sort of unofficial locals night. The crowd is great and it’s just an all-around good vibe. It’s busy enough to create a vibrant energy but not so busy you can’t get a seat and we all tend to have a little more fun and can interact with the guests more.

The next big thing in cocktails is_____?
I think it’s going to go in many directions. Now that there are so many great minds and talents out there, you’re going to see a lot of different things. But I’m hoping to see consistency. With so many cocktail programs out there, there is still a lot of mediocrity in getting a decent drink in most places, so to see a cocktail foundation becoming more widespread—especially outside the metropolitan areas—will be huge. That and things being more locally driven.

What’s your hidden talent?
I’ve been known to kick a rhyme or two, or maybe play a little sax, but mostly I like to write and play around with words.

Where do you like to drink in L.A.?
I like the Eveleigh, especially on their guest bartending Mondays. Naomi [Schimek] is doing killer things at the Spare Room, Monaco Mondays at Pour Vous, Varnish, Playa, Short Order, Writer’s Room, and I still have a soft spot for Seven Grand; there’s nothing better sometimes than drinking whiskey and playing pool.

Where’s your favorite place to eat in L.A.?
I don’t get a chance to go out eating much these days because of my schedule and I tend to like to be casual when I am off, so I like hitting up Short Order or Playa and also this pretty tight noodle spot in East Hollywood called Pa-Ord, that shit’s legit.

What do you like to drink when you’re not working (doesn’t have to be cocktails)?
I like my coffee for sure, and a good glass of red wine with some food, maybe a nice Rioja, Châteauneuf-du-Pape, or rosé when it’s warm out. Maybe I’m getting older. But I’m most likely kicking back a cocktail or some Tequila Ocho neat or whiskey with good friends somewhere, trying to take some stress off or showing love to someone else who is behind a bar or doing something new.