Home Uncategorized Behind the Bartender: Naomi Schimek of Spare Room 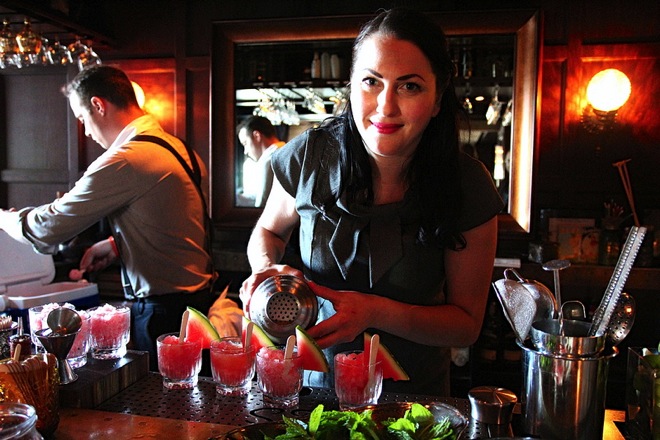 Hollywood Roosevelt Spare Room beverage director Naomi Schimek may have pin-up girl good looks but her mad mixology skills prove that she’s not just a pretty face. Every time I’ve asked her for a cocktail recipe for a write-up, it usually involves something more than mere mixing, like doing up an Oleo Saccharum for punch or making watermelon ice. That’s thanks to her training by some of the cocktail industry’s biggest names — Audrey Saunders (Pegu Club), Christy Pope and Chad Solomon (Cuff and Buttons) and Marcos Tello (Tello Demarest Liquid Assets).

We asked her some quick questions, as part of a recurring Q&A series on L.A. bartenders. Here are her answers.

What’s a popular drink at your bar?
One that is made swiftly and served with a smile.

Where do you draw your inspiration from?
The beauty of the changing of the seasons.

What’s the best night to go to your bar and why?
I love Mondays for the gaming tournaments and Thursdays for the live music.

The next big thing in cocktails is_____?
An attitude shift – I see a lot of new bartenders finally realizing that hospitality is just as important as an ingredient no one has ever heard of before. And shagbark hickory syrup.

If you could have a superpower what would it be?
Instead of being able to read people’s minds, I want to be able to read their taste buds.

Where do you like to drink in L.A.?
Big Bar at the Alcove.

Where’s your favorite place to eat in L.A.?
My dining room table with my family on Sunday nights.

What do you like to drink when you’re not working (doesn’t have to be cocktails)?
I adore root beer but mostly drink kombucha.