Home Uncategorized Behind the Bartender: Brittini Rae Peterson of Goldie’s 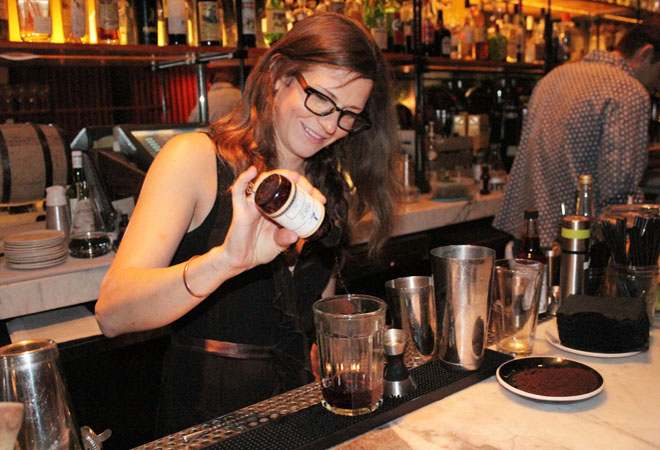 Goldie’s bartender Brittini Rae Peterson is one of those natural talents; no flashy gimmicks or mixology theatrics here. Instead she’d rather take something out of a recipe than add things in. She just has a knack for putting winning flavors together, a skill honed by working at the SoHo House West Hollywood, the Tar Pit and at Michael Voltaggio’s Ink where she reinvented simple classics. Now she runs the cocktail program at Goldie’s on Third Street continuing to take classics to the next level, like her Battery Park cocktail, a Manhattan with a Peychaud’s bitters ice ball that slowly melts and transforms the drink into an Old Fashioned.

And even though beautiful bespectacled Brittini continues to rack up cocktail competition wins and awards like “Eater LA’s Bartender of the Year 2013,” she’s refreshingly humble. Sometimes her cocktail ideas come from someplace like in the mail from her well-meaning grandma. Her eggnog this past holiday season was “borrowed” from her grandma’s cookbook. It’s all very cute and quaint, but most importantly tasty, too.

With eggnog in hand, I was able to catch up with her for my recurring Q&A with L.A. bartenders. Here are her quick answers.

What’s a popular drink at your bar?
By far the Golden Girl, with spiced tequila, homemade passion fruit syrup, agave, a lime meringue. It’s pretty hard not to go wrong with a spicy margarita. The Battery Park is also a favorite, a twist on a Manhattan served over a bitter ice sphere.

Where do you draw your inspiration from?
Honestly, food. When I eat a good dish or dessert, I always find myself wondering how I can transform it into a cocktail while still maintaining a similar flavor profile.  For example, another popular cocktail at Goldie’s is the 3rd Street Mai Tai, it’s a variation of Chef Jordan Kahn’s Coconut Bavarios over at Red Medicine, with coconut, chocolate and basil. The Mr. Rogers cocktail is a play off my own chef, Thomas Lim’s, French toast, with brown butter bourbon and maple.

What’s the best night to go to your bar and why?
Thursday. Not too busy, not too slow. It’s actually a pretty small bar when it comes to amount of legroom so Friday and Saturday can be a bit packed.

The next big thing in cocktails is_____?
What isn’t the next big thing? Barrel aged? Canned? Smoked? Bottled? On draft? Homemade bitters/tinctures/booze? Honestly, with the whole skinny/vegan phenomenon, I’m going to go with “all organic.”

If you could have a superpower what would it be?
I’d like to read people’s mind, I’d imagine that would come in handy being in the service industry.

Where do you like to drink in L.A.?
Wherever my friends are. I enjoy the cocktails at Eveleigh and Sadie.  Harvard and Stone for a good nightcap.

Where’s your favorite place to eat in L.A.?
Rustic Canyon. Amazing food without the pretentious atmosphere.

What do you like to drink when you’re not working (doesn’t have to be cocktails)?
Single malt scotch.  I also try and have at least one healthy juice a day (JUICE down the street from Goldie’s on 3rd is amazing!).

More Behind the Bartender posts on LAmag.com