Home Uncategorized Behind the Bartender: Beau du Bois of The Corner Door 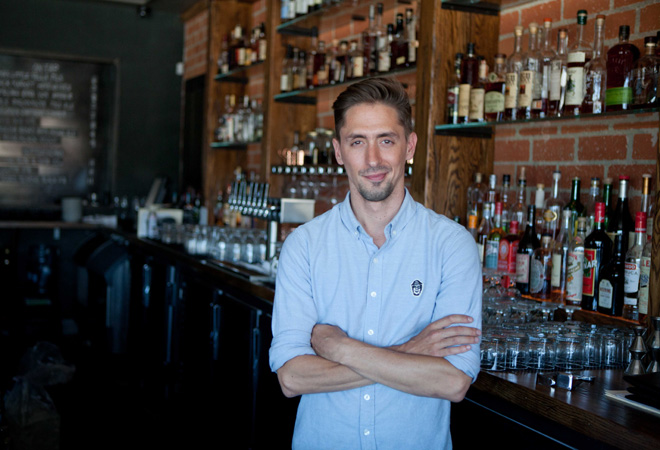 Photograph courtesy of The Corner Door

The first time I met bartender Beau du Bois was on Sunset Boulevard when he was working the RH Bar at the Andaz West Hollywood. It was during a madhouse of an ‘80s blogger prom in 2009. I never really got to talk to him. But I always remembered him for his hospitality and bartending skills in the face of a hundred thirsty bloggers. He went on to launch the cocktail program at David LeFevre’s MB Post when it first opened in Manhattan Beach and impress the bloggerati with his modern, crafty twists on classics. And now he’s thankfully moved more inland (closer to me!), settling into the Corner Door in West L.A. There he comes up with straightforward cocktails of unusual flavor combinations and funky names, using housemade cordials and infusions. Earlier this year Zagat tagged him as one of 30 up-and-comers under 30 for 2013.

I was able to catch up with him for my recurring Q&A with L.A. bartenders. Here are his quick answers.

Where do you draw your inspiration from?
Cooking, movies, books, and the taste/texture of unique spirits.

What’s the best night to go to your bar and why?
Thursdays are my favorite. Great crowd but not crowded. Since it’s not slammed, the bartenders have a little extra time to navigate guest’s cocktail interests and show their skills.

The next big thing in cocktails is_____?
Armagnac, I’ve become quite taken with its complexity. Over the past few years, bartenders have developed a preference for rye over bourbon, due to its robust depth of flavor. With more rustic flavor and better texture, armagnac is also usually cheaper than cognac.

If you could have a super power what would it be?
No joke, dancing is my super power. It has been since I was young. The first time my wife saw me dance was after we’d been married for a few months. Her jaw was on the floor.

Where do you like to drink in L.A.?
If I get out of work early enough, I’ll swing through Oldfield’s. It’s usually mellow late night, and Robin has an amazing, no muss, no fuss approach to making cocktails. No foraged, sous-vied wacky ingredients; just good, balanced drinks.

Where’s your favorite place to eat in L.A.?
Son of a Gun. My wife and I live around the corner and can usually be found scoping out a couple seats at the bar on my nights off. The food and drinks are excellent, but the staff is really incredible too.

What do you like to drink when you’re not working? Doesn’t have to be cocktails.
I’ll have some whiskey here and there, but mostly beer. I usually prefer IPAs or a medium-bodied pilsner, but sometimes I’ll grab a sixer of High Life, cuz I like to rock.