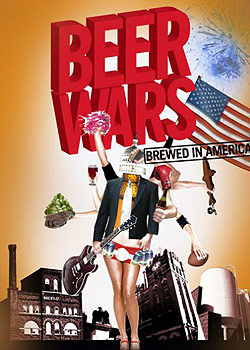 Today marks the premier of Beer Wars, a feature film documentary about the battle of the brews going on in America.

In this corner, you’ve got “the old dinosaurs” which are Coors, Budweiser, Miller. In the other, there’s everyone else—the small guys trying to get good beer out there to the American public. At least that’s how the film frames it. It is, shall we say, a limited release, but loads of beer big wigs make appearances, including Jim Koch of Sam Adam’s, Todd Alstrom of BeerAdvocate, and Greg Koch, founder of San Diego’s Stone Brewing Company—the only California brewery featured, a far as I can tell from the trailer. We’re lucky to have a good half a dozen or so theaters screening the film. Check here to see where. Click here for the trailer.

Celebrate the flick with a beer float at Golden State. Someone tell me why I haven’t had this yet? A scoop of Scoops brown bread-flavor gelato bobbing in a pint of Old Rasputin Imperial Stout. Y.U.M.