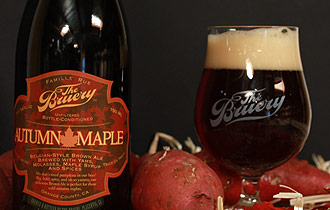 Share
Email
Facebook
Twitter
Pinterest
ReddIt
Ah, Thanksgiving—the food, the folks, the anxiety. So much fuss is made over the big meal, but if your gatherings are anything like ours (read: a little tense) we’re often more concerned with what’s filling our cups than our plates. The pinot versus cab debate goes on, and frankly, we’re tired of it. This year, we’re ditching the corkscrew and popping a craft brew.

“Wine is tricky,” says Chef Aaron Robins of Boneyard Bistro, a beer and BBQ favorite in the heart of Sherman Oaks. “It’s not just the grape varietal, it’s the region, the vintage, the producer. With beer, you have more flexibility, and you can find the right beer for the right food without investing a fortune.”

With turkey, Robins recommends ambers or pale ales. “I wouldn’t lean towards IPAs or anything too hoppy. Find something with a good balance, like Russian River Damnation.” For ham or prime rib, he goes darker. “A Belgian ale like St.Bernardus Abt 12 or the blue Chimay would work quite well.”

Patrick Rue, brewer and owner of the Bruery in Placentia (another one of Robins’ faves), recommends his Autumn Maple, a seasonal sipper spiked with sweet potatoes, spices, and yes, maple, “It’s Thanksgiving in a glass,” says Rue. Also from the Bruery, Saison Rue, with its light funk and spicy rye character. “You can also use it to baste and inject the turkey, and it’s delicious when used in the mashed potatoes.”

“A world-class beer is going to be much more affordable than even just a passable wine,” says Rue.

“Besides,” adds Robins, “beer is so much more fun.” Agreed.