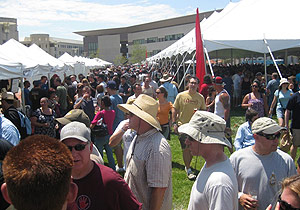 Brewers and beer geeks alike came out to Cal State San Marcos last Saturday to celebrate Stone Brewing Company’s 13th Anniversary. Famous for their flagship beer, Arrogant Bastard, Stone has made quite a name for themselves over the years, taking in countless accolades, not to mention being voted “All-Time Top Brewery on Planet Earth” by BeerAdvocate magazine last year. They’ve also expanded their portfolio, and have begun distributing other microbrews, spreading the gospel of craft beer. The shindig last weekend was more than just a commemoration of Stone’s anniversary, it was a celebration of the leaps and bounds that good, hard-working small brewers the world over have been making in the name of tasty suds.

All in all, it was a refreshing look at the beverage industry—a business usually full of big corporations with bitter rivalries battling for market control. Not here. Not these guys. There is an open exchange of information between craft brewers, and lately there have even been collaborative brews—different breweries, working together to release something special. One featured favorite was the Ken Schmidt/Maui/Stone Kona Coffee, Macadamia, Coconut Porter, a rich and exotic concoction brewed up by homebrewer extraordinaire Ken Schmidt, Maui Brewing’s Garrett Marrero, and Stone’s Mitch Steele.

Local SoCal favorites like The Bruery, AleSmith, The Lost Abbey, Craftsman, and Ballast Point were on hand sampling their goods, as were out-of-town pioneers like Jolly Pumpkin (MI), Allagash (ME), and Ommegang (NY). Aside from raising more than six figures for several charities, the anniversary fête was also a success for beer drinkers, with brewers bringing out special releases and sneak previews.

Tomme Arthur of The Lost Abbey made a “sangria” of sorts, using a sour ale base blended with an ale that had been aging with tangerines, adding raspberries, sour cherries, raspberry mead, “and surely not a drop of wine.” Patrick Rue from The Bruery brought out the big guns, previewing his much anticipated bourbon barrel-aged imperial stout, dubbed Black Tuesday, which weighs in at a massive 19.5% ABV.

The 13th anniversary party may be over, but some bottles of Stone’s super-hoppy 13th Anniversary Ale can still be found scattered about at select retailers, and some kegs are still popping up in better beer-minded bars around Los Angeles.