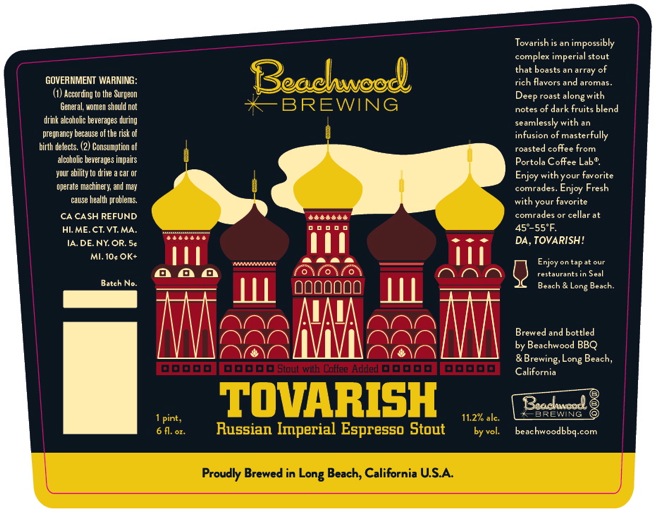 Long Beach’s celebrated Beachwood BBQ & Brewing has been churning out some serious beers since opening in summer 2011. In fact, brewmaster Julian Shrago has taken home some impressive medals, including two at this year’s Great American Beer Festival. Thus far, their beers have only been available on draft or in take-home refillable growlers, but now, Beachwood’s first bottled beer is hitting shelves, much to my joy and delight.

Tovarish Russian Imperial Espresso Stout, a decidedly high-octane beer gets the honor of being their first packaged release. Dark and intensely malty, it’s topped up with a bit of blackstrap molasses and an extra punch thanks to a blend of coffee beans specially roasted for Beachwood courtesy of Jeff Duggan at Portola Coffee Lab in Costa Mesa. Originally conceived by Shrago as a homebrew, he went on to brew it with Pizza Port Solana Beach, earning various awards for it along the way, including “Best of Show” at the 2008 San Diego County Fair homebrew competition and first place at the 2010 Southern California Homebrewers Festival.

Tovarish will be sold at the Long Beach restaurant-brewery, as well as local stores like Whole Foods Market Long Beach (6550 E Pacific Coast Hwy, Long Beach), Hi-Time Wine Cellars (250 Ogle St., Costa Mesa), and The Bruery Provisions (143 N Glassell St., Orange) beginning on Friday, December 14. One 22 fl oz. bottle is gonna set you back about $20, but at 11.2% alcohol by volume, a little bit will go a long way.