Home Uncategorized The Venice Whaler Gets a Massive Overhaul 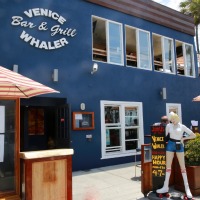 Located at the base of the Venice Pier for 70 years, two-story beachside shack The Venice Whaler has had quite the history(in the 60s and 70s, it was a hangout for bands like The Beach Boys and The Doors). It’s weathered facade has always hosted an eclectic crowd of locals and tourists, and when the restaurant closed earlier this year for renovations, many fans feared the restaurant would lose much of its retro charm.

Thankfully, new owner Mike Dobson (who also co-owns Red O on Melrose and Santa Monica’s Ma’Kai) has given the space a much needed update without disturbing too much of the old brass-and-navy blue nautical vibe. Local mural artist Jonas Never  even added a large mural to the side of the building, riffing on the iconic V-J Day Kiss photo.

The biggest alterations, though, have been reserved for the food and drink menus. New head chef (and avid surfer) Nick Liberato, who has worked at Comme Ca and runs a catering company called Calidelphia, is behind a new lineup of “upscale dive-bar food,” made with farmer’s market produce from down the street. You’ll find house-made clam and corn chowder with bacon, “hangover lettuce wraps” with chicharron and guacamole, beach mussels with kaffir lime cream, chopped clam and serrano chili pizza, and a classic shrimp roll on brioche.  And although you’ll find both quinoa and kale salads among the news dishes, classics like the Belgian beer-battered fish ‘n’ chips and the Whaler Burger, topped with cheddar and slaw, have remained in place. Liberato also expects the menu to change three or four times a year based on the seasons.

One the drink side of the equation, bartender Anthony Settecase (formely of Día de Campo and Cole’s Bar) has upped the ante on the upstairs “Beach Booze” menu with classic oceanside cocktails like a proper Pina Colada, a Trader Vic original recipe Mai Tai, a refreshing Aperol Spritz, and a “The Crab Shell” Bloody Mary, which pays tribute to the Whaler’s original name when it opened in the 40’s and features a whole crab claw as a garnish.