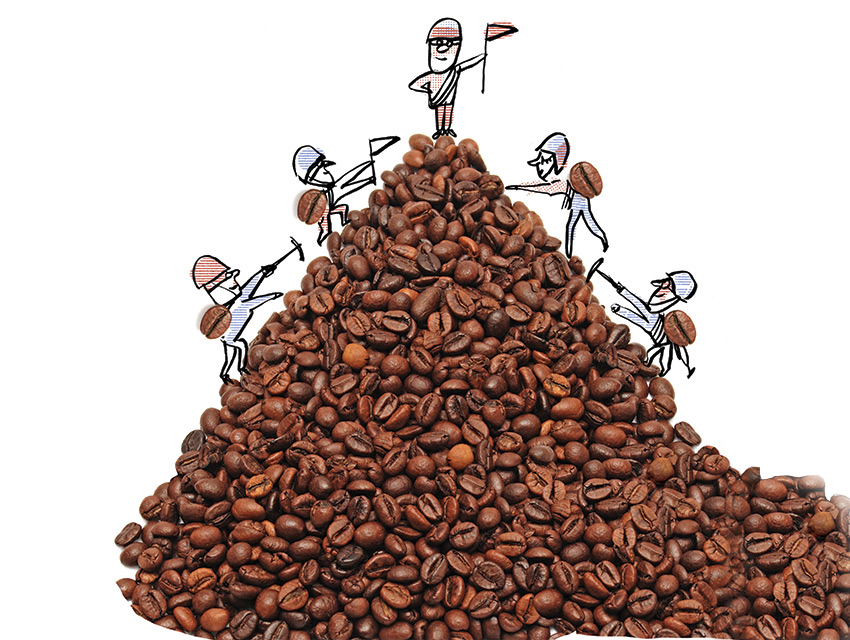 Los Angeles has a coffee problem. When it comes to specialty joe—$7 cups, single-origin beans, light roasts—we have no national clout. In terms of scale and name recognition, L.A. is as weak as a mug of Folgers. The biggest artisanal roasters within city bounds are from out of town: Intelligentsia (Chicago), Stumptown (Portland). Last year, Oakland’s Blue Bottle, well on its way to becoming the Starbucks of the scene, moved in. So why are we letting bean pushers from other territories run our turf?

Short answer: Our hometown hero, Handsome Coffee, sold out after three years. The same purists who famously banned sweetener from their bustling Arts District headquarters not only shut down in April but also handed the keys to Blue Bottle, which purchased the shop and roastery after a $25.7 million venture-capital infusion. Handsome was “building something beautiful,” says Zayde Naquib, founder of the buzzing Culver City roaster Bar Nine Collective. “Blue Bottle saw that and took advantage.”

The Bay Area giant now reigns on Abbot Kinney Boulevard, too, bringing its total number of cafés to 16, with seven in New York and a Tokyo lease freshly signed. Locally, the company eliminated Southern California’s top indie brand and secured a foothold—one with a proven customer base and pesky permits filed away. The latter is an obstacle for would-be competitors. “L.A. has tougher air-quality standards than anybody,” says Handsome cofounder Tyler Wells. He left just before the sale, which he credits to an internal loss of vision. “Roasting here falls under the same zoning as manufacturing ammonia and dynamite. It’s a very difficult process, and ‘difficult’ equals money.”

William “Franky Sword” Miyazaki knows this, so he keeps his scrappy Suits & Knives roasting operation under the radar, refusing to share the location with the city. But the longtime barista—who also co-owns the Downtown café Coffee Colab—doesn’t blame the bylaws. “Small coffee shops want to use big names for brand equity,” he says. “It’s every barista’s fault this is happening. We represented these companies. We gave them their power here. Our local roasters do it better now, but we’re fighting a current.”

Bar Nine will likely lead the way. Naquib has set up an elegant retail space that pairs fresh tech with reclaimed wood. The beans are rare. The packaging is slick. There’s a whole roasting department, including a quality-control guy and a food-science gal. Visit and you’ll notice formulas scrawled on the glass walls at the back.

“These outsiders see the same humongous market potential that we do,” says Naquib. “There’s nobody doing great stuff in L.A. There are a lot of passionate guys doing very good stuff who laid the groundwork for others, like us, to take it to another level.”

“The entire city is gearing up to take on Blue Bottle. I want to give them one flag to fly under,” says Paul. He envisions a coalition of humble companies pitching in on a collective export. And eventually a brick-and-mortar klatch: L.A. Coffee Clubs around the country, he says, “just like there’s a CPK wherever you go.”