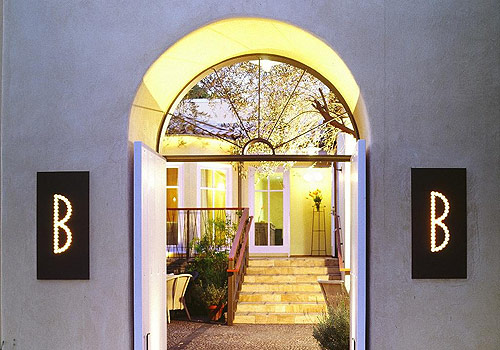 Alain Giraud, Ludovic Lefebvre, now Walter Manzke? Manzke told our friends at
Eater LA yesterday that he “was encouraged to step away.” It never takes long for Bastide’s chefs, who’ve collectively earned the restaurant a milky way of stars, to pack up their knives and move on. What gives?

Few restaurant owners invite more speculation than Joe Pytka, who once described himself as a “prick.” He’s a 69 year old with shoulder length hair and a ludicrous stash of Chateau d’Yquem—which is but a baby subset of a wine collection so broad and deep it formed the core of the original all-French cellar at Bastide. When he and Giraud first opened (Nancy Reagan and her pal Betsy Bloomingdale were early birds), the restaurant was closed to the public on weekends—so Pytka could use it for his own entertaining. He made headlines paying $35,000 for a 2.2 pound Alba truffle a few years back. His idea of research is a non stop eat-a-thon through Europe’s best restaurants, an excursion facilitated by the use of a private jet. Suffice it to say, Pytka’s not in the restaurant business in the hopes of making a killing; he’s done that directing commercials. What he’s after is a restaurant that makes waves, that gets people (the right people, of course, the ones who are going to contemplate that 1937 Romanee Conti for $12,600) talking.

These are exciting and daunting parameters for a chef, as Giraud (who’s about to open Anisette in Santa Monica), Lefebvre (who is opening a restaurant in Vegas), and Manzke (we’ll get back to you) might attest. We’re wishing the new chef Paul Shoemaker, who was a highly valued member of the Providence team, the best and we’re on-our-knees grateful that Pytka’s not doing tapas, a steakhouse, or sushi, God bless him. But all this opening, closing, remodeling, rethinking, firing, and hiring can having a numbing effect on a diner: What phase is Bastide in now? Is it actually open? For lunch? Who’s the chef? What’s the menu? Who knows.

Here’s hoping that Pytka, who’s no slouch when it comes to attracting top talent, and Shoemaker find their groove. Our secret fantasy: A Bastide alumni dinner. Giraud, Lefebvre, Manzke and Shoemaker join up a la the 5X5 Chef’s Collaborative dinners that Cimarusti spearheads. They crowd into Bastide’s kitchen (wired, because we want to hear all the war stories) and cook their hearts out. We want to be at that dinner.