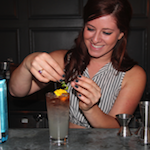 The Churchill on Third Street in Mid-City West has gone through a slew of changes recently, with a chef change, the addition of a walk-up Clover Juice window, and now a brand-new cocktail program. Cocktail consultant Mia Sarazen did the cocktail program just last year creating new classics using fresh ingredients. But Julian Cox-trained bartender Karen Grill (Bestia, Playa) has now taken over the program, refreshing the list with her own crafty spin on classics. (The Manhattan on tap will still be available, however, “because it’s pretty delicious,” says Karen, who tweaked the specs a bit.)

Karen says she’ll keep the cocktails simple, approachable, and tasty. “They’re all spins on classics so they’re not crazy or out of the ordinary. We’re not going to turn this into a cocktail bar that alienates people that don’t care. I want it to be a place where people who like cocktails can have a drink and where people who don’t give a shit [about ‘mixology’] can come in and have a good drink. I don’t want it to be too much, too snobby.”

Her cocktails will be seasonal and highlight local brands.  “I’m trying to keep everything local. If there’s a spirit that I can use that’s made in L.A. or California, I’m going to use that.”

And Karen, a craft beer geek, also intends to change up the Churchill’s beer lineup. “You’re going to see some mass-produced beer come off and craft beer come in.”

The new cocktail menu debuts tomorrow, while the new beers will show up in a couple weeks. Here’s a look at the her new list along with her notes.

“Lilly of the Valley”: Bombay Sapphire gin, agave, Chareau aloe liqueur, soda, float of rose. This is the cocktail that Karen did for a recent Bombay Sapphire competition where she was one of the top 10 finalists. But she’s considering switching up the gin for vodka for the menu.

“Bergamot Sour”: “My favorite one on the list. This is the ‘reach cocktail’ but it has vodka in it so I’m sure people will just see ‘vodka’ and order it. But it’s a vodka sour with amaro. Cio Ciaro is the only amaro they have, which is my favorite to sip on after dinner. So I did a Bergamot Sour with Louis Anderman’s Bergamot Bitters, egg white, vodka, Cio Ciaro, lemon with a splash of lemon and we’ll do a little stencil of the bulldog [The Churchill’s mascot].”

“MezCalifornia Dreamin’”: “This is my margarita riff but I wanted to take us away from a regular tequila margarita and bring mezcal to the forefront. It’s mezcal, the Art in the Age sage liqueur, Cointreau, lime, and a little bit of sugar. Really simple. It’s in a coupe rather than on the rocks with salt. It doesn’t really need salt, it’s perfect on its own. It’s slightly smoky, a little sweet, has a savory, crispness to it from the sage.”

“Westside Negroni”: “This is a Negroni I tailored to the area and the clientele. It’s a little sweeter than a Negroni by taking out vermouth and Campari and using Aperol and sherry. It’s got that little bitter bite to it from the Aperol and the lemon zest, but it’s not overly bitter.”

“Tiki-Tiki Tembo”: Atlantico aged rum, Cynar, pineapple, lime, orgeat, nutmeg. “This is a swizzle. I’m really happy with the way it came out.” It’s named after a children’s story. “We’re taking Tiki and going with darker flavors for fall, like artichoke, almond, nutmeg.”

“High Tea”: Tequila, rhubarb liqueur, Earl Grey tea, lemon juice, orange bitters, soda. “It’s so nice. It’s definitely going to be that brunch cocktail. Churchill is open all day long so I wouldn’t want them to switch up menus. I want them to be able to have them all at once.”

Caipeira: “It’s a pear Caipirinha with Leblon Cachaca, pear brandy, cane sugar and lime with a little bit of Peychauds so it’s going to be an interesting twist on a fall Caipirinha.” It was inspired by one of the Churchill bartenders who is from Brazil.

24th 1/2 Century: Famous Grouse Scotch, Punt e Mes, White Cacao, lemon juice, nutmeg. “The name came before the cocktail. There’s this old Daffy Duck cartoon where he goes to a planet and claims it in the name of Duck Dodgers in the 24 ½ century and then he turns around and Marvin the Martian is already there. So I did a riff on the 19th century cocktail and called it 24 ½ Century. This is my fall scotch cocktail for this place. I wanted to bring a scotch cocktail to somewhere where people might be a little uncomfortable with it. The thought of using nutmeg and cacao [might appeal to them], it’s chocolate so it’s like a Chocolate tini.”