Home Dining Chefs and Restaurateurs Inside the Complicated Journey of Baroo, L.A.’s Most Quixotic Restaurant 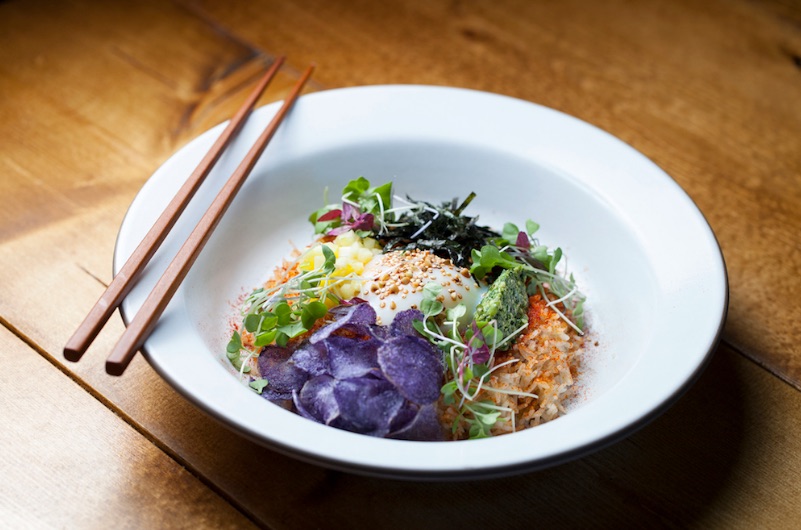 Kwang Uh and Mina Park, the couple at the heart of Baroo, have taken a different path than most restaurateurs. The pair met at the South Korean temple of Buddhist monk Jeong Kwan, who in addition to her Zen practice, is also an acclaimed chef (and is even featured on an episode of Chef’s Table) and infuse their cooking with their spiritual values. In 2015, when Baroo opened in a Hollywood strip-mall, it was an almost instant sensation, with the experimental takes on Korean fare that earned raves from Jonathan Gold, picked up a James Beard Award nomination, and led to it being named one of the best new restaurants in America by Bon Appétit.

The accolades were appreciated, but the aftermath was a struggle for the tiny operation. Uh returned to the temple for several months to refocus, leaving business partner Matthew Kim looking after Baroo. The restaurant was closed temporarily, then reopened, only to finally close again in October, 2018. Uh and Park thought, at the time, the closure would be permanent. But just as legions of diners kept returning to the intriguing, fermented, sophisticated flavors of Baroo, they too, ultimately, wanted to return.

Once they decided to open a new Baroo, the first problem would be finding a new space, as Kim had already flipped it into a new concept after Baroo vacated. The search has taken longer than expected, and in the interim they’ve opened an outpost they call Baroo Canteen, serving a brief menu of comfort dishes (filtered through the Baroo lens) out of a space at the Union Swap Meet building in East Hollywood.

We spoke with Park this week about reopening, and the future Baroo–and about making the choice to prioritize making a business that is conscious, sustainable, and mindful.

Were you caught off guard by the out-pouring of affection and appreciation when you announced the closing of the first Baroo?

Honestly, we were not expecting that. We were really touched, especially when regulars came out multiple times during our last month. We could really feel the affection people had for Baroo, and that made us want to stay in L.A. and reopen again.

We don’t believe Baroo is special in and of itself. Really, everything is connected. The customers who came to Baroo are special. They came became they have an open mind and don’t mind the lack of service or ambiance. They arrived with an emotional bond to food and cooking already. If people felt a connection to Baroo, we are very happy to hear that.

When you cook, you pass on your energy through your food. And we hope we can share positive energy through our cooking. The name “baroo” comes from Korean Buddhist tradition, and the Buddhist approach to cooking, with its focus on connectedness and energy, is something we try to keep in mind.

Why relaunch Baroo with the Canteen project now?

We want to open a bigger space with a proper team, but still retain the old Baroo free-style spirit. We are working on opening a new proper restaurant, the new Baroo, but that’s taking longer than we expected. It could be late 2019, or later, before we actually are able to open the new Baroo.

We couldn’t just sit at home until then, for practical reasons, and also when you’re a cook, you need to keep cooking. We found a small kitchen that we could rent cheaply on a month-to-month basis. So we thought it would be good for us to get back in the kitchen, work on the menu for the new Baroo and have some fun.

How were you spending the time during the few months that Baroo was closed?

We have been spending most of our time looking for a new site for Baroo and developing the concept and business plan for it. It seems like we’ve seen every restaurant for sale on the east side. We also travelled to Korea and Japan for inspiration, and spent a lot of time researching recipes. We also found time to get married, though we will properly celebrate later this year in Korea.

As business owners and chefs, what are you doing to find balance and sustainability while running a successful restaurant?

Both of us are workaholics, so balance and sustainability are things we’re still working towards. Like most small business owners, we live, breathe, and dream about work. So we try to make sure that we find balance, at least in small ways. Like always eat a proper breakfast, and eat a delicious family meal together with our one employee. We also both meditate and try to approach what we do consciously and with openness. If we’re not happy ourselves, then we can’t make delicious food. We firmly believe that.

What, in your opinion, is the must-try dish on the current menu?

Our canteen menu is mostly based on Baroo family meals, comfort food with Baroo color. Our favorite new dish is the gochujang kling, which was originally inspired by khua kling, a Southern Thai dish of minced pork and stink beans, one of our favorite things to eat in Thai Town. Our dish is nothing like the inspiration though. It’s minced pork, sautéed with pancetta, nduja spices, gochujang, and some Thai aromatics, with fermented radish, served over Koda Farms Kokuho Rose rice, an incredible rice grown right in California. This dish is pure comfort food, but with a lot of depth in the flavors, we hope.