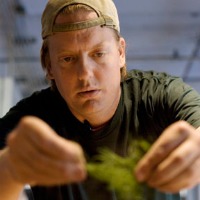 Whether or not Blotta and Tennor were ready to announce the new project, it’s happening, and possibly as soon as October. Taking over the former Bistro LQ space on Beverly and tentatively named Cook County after Mattern’s Chicago hometown (though Tennor kind of likes Cooks County better), the restaurant will be a Campanile reunion of sorts. Mattern was cooking in the famed La Brea kitchen back in the day while Jullapat was plating desserts for Nancy Silverton, Tennor was waiting tables, and Blotta was managing partner. The food will be similarly Californian, ditching the Barbrix small plates formula for (gasp!) a traditional appetizer/entrée format.

“Dan is really into seafood right now,” says Tennor. “Roasted whole fish, Santa Barbara spot prawns—whatever’s fresh and in season. And we want to keep this affordable—we really aim to be a neighborhood spot. Most entrees will be around $15 to $16 with maybe something extravagant at around $22.”

Blotta will be behind the wine list, which Tennor says will skew global and inexpensive, and Playa/Rivera architect Osvaldo Maiozzi will be behind what Tennor calls a “ light remodel.”

Cook County is just the first in what Blotta and Tennor hope becomes a mini-empire of sorts. “Claudio wants to have a whole bunch of restaurants,” says Tennor. “He really admires Danny Meyer.” The couple is still actively looking for the right location for a second Barbrix somewhere further west which will give chef Don Dickman, who was just made a partner, another venue for his Mediterranean fare.

[Barbrix, by the way, just won Best Wine Bar in our annual Best of L.A. issue, on stands now.]