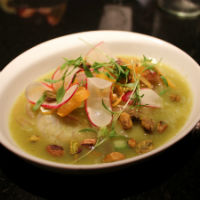 Chef Eduardo Ruiz has been tirelessly rolling out plates left and right, from Bell’s acclaimed Corazon y Miel to his new sausage and craft beer spot in Pasadena, Picnik.

If he wasn’t busy enough already, Ruiz and his chef-partner Felix Barron recently decided to utilize the quiet side bar at Picnik to launch a seafood side project called Bar + Fish: Modern Mariscos Bar, which began service on Friday night.

Ruiz and his team had always planned to make Picnik a multi-purpose hangout with several components. Besides the main sausage and beer counter, there is now a breakfast space called KTCHN (cheffed by Barron), an upstairs cocktail lounge focused on punches, and a casual cold seafood bar.

At Bar + Fish, the short menu is composed of five items that change on a weekly basis, along with a similar number of cocktails. You can often catch Ruiz taking orders, busing, mixing drinks (I believe I saw him shake a cocktail while ringing up an order on the P.O.S. system) and, most importantly, preparing seafood delights.

Bar + Fish’s coconut shrimp ceviche delivers the classic taste of contemporary Latin-American beach fare, with tasty shrimp accented by sweet heirloom tomatoes, coconut, fennel, spicy serrano pepper cream and aromatic kaffir lime leaves. Ruiz injects the combination of burrata and sea urchin with a little heat by adding salsa de molcajete (mortar and pestle salsa) and red peppercorns. The octopus cocktail uses a broth made with the cooking liquid of the octopus, along with beet and lime juice, which flavor the tender octopus. Cooked cherrystone clams are added too, enhanced with a shot of house habanero salsa that brightens the marine flavors nicely.

The concept came together pretty quickly, as it goes for Ruiz and his busy team. Still, this might be the strongest concept by Ruiz to date, and is among the best spot in town for a seafood tostada and a cocktail right now. Bar + Fish is open Thursday through Saturday, from 5p.m. until the kitchen runs out.