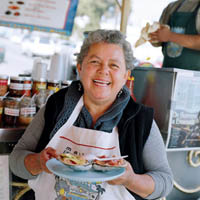 File this one under: Si, por favor! The delicious Baja Invasion continues next month at Playa restaurant, where chef John Sedlar has invited some of the region’s top culinary talents to guest chef throughout the month of September. Each chef will cook five courses, ranging in price from $5 to $18.

First up is Sabina Banderas with her acclaimed seafood stand La Guerrerense on September 16 to 18. Her tostadas made with sea urchin, sea cucumber, and sea snail have won awards at the last two L.A. Street Food Fests, and had Anthony Bourdain swooning on a recent episode of No Reservations.

Next up from September 23 to 25 is Benito Molina of Ensenada. One of the pioneers of the modern Baja Med movement, Molina cooks contemporary seafood-centric fare with a focus on regional wines at his restaurant Manzanilla.

Lastly from September 30 to October 2 is the chef team behind Tinuana’s Tacos Kokopelli, Guillermo “Oso” Campos Moreno, his brother Pablo Campos, and Orlando “Cricket” Miguel de Monte. The street stand opened in 2012 and debuted their goods at this year’s L.A. Street Food Fest where they earned an honorable mention.

Make reservations through Playa. If you like what you taste, think about heading down to Tijuana (yes, Tijuana) for the Second Annual Baja Culinary Fest October 11 to 14 where you can sample the foods of these chefs and many more.