Home Drinking Cocktails An Austin Powers Theme Bar Just Popped Up in the Most Unexpected... 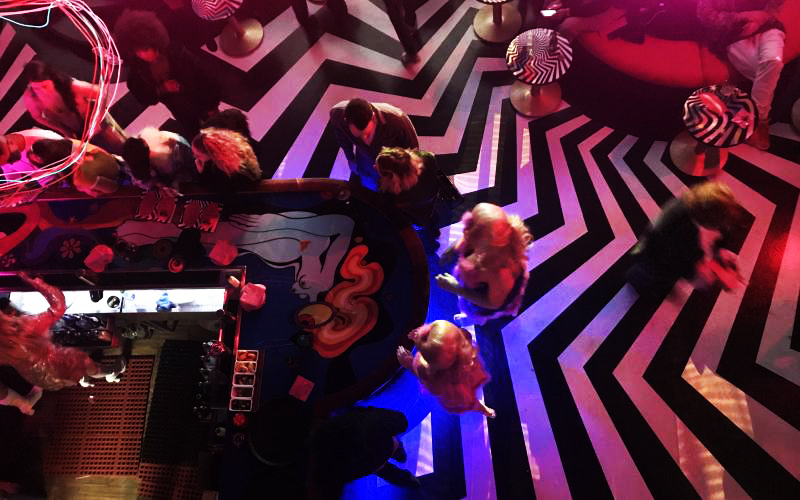 It has been 21 years the world met Austin Powers, and now that the character is of drinking age, a new theme bar is opening that celebrates the shagadelic super spy. Electric Pussycat in downtown Glendale is inspired by the swinging London nightclub that opens the first movie, and is filled with lava lamps, love beads, and, on the night I visited, some pretty convincing Fembots at the bar chatting up customers.

The groovy room is the brainchild of the folks behind Beetle House in Hollywood, a tribute to the world of Tim Burton that has long outlived its original three-month pop-up status.

The two-story space has a tiny stage for go-go dancers, a vintage Volkswagen bug as a DJ station (although I still can’t understand how Color Me Badd and the Notorious B.I.G. fit the theme), and a massive wall mural of laser sharks. It’s fun to watch the action from the second bar upstairs where you can study the psychedelic swirls while imagining some choreographed fight scene playing out on the illuminated dance floor. They serve salads, a bunch of unusual takes on the grilled cheese sandwich, and a pretty goofy and fun cocktail menu filled with movie jokes, like a Goldschläger and apple cider cocktail called “Smoke and Pancake” and a marshmallow, Nutella, RumChata, and whipped cream concoction called the “Phat Bastard.” Probably the most unusual thing about this unusual place is the location. All this candy-colored insanity is hidden inside a century-old bank building in downtown Glendale -sandwiched in between a menswear store and an optometrist—an unsuspecting lair for Dr. Evil. RELATED: Everything We Know About the “Lego”-Themed Pop-Up Bar Coming to L.A.