Home Uncategorized At This Minute Ron Artest is Serving Ice Pops From the Sungevity... 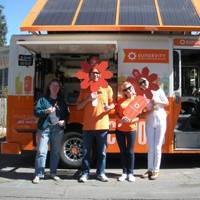 Basketball fans: That’s not some look-a-like with a crazy close resemblance to Metta World Peace working his stuff outside Hollywood & Highland. The Los Angeles Laker formerly known as Ron Artest is, at this moment, serving organic ice pops out of the Sungevity Ice Pop Truck at the center.

According to a press release on the event, the former Dancing With the Stars competitor will be selling treats until 2 p.m., and he’s open to talking about the current cast of that show, his partnership with Sungevity (a solar rooftop company), and “how he’s keeping busy during the NBA lock-out.” Any questions about that?