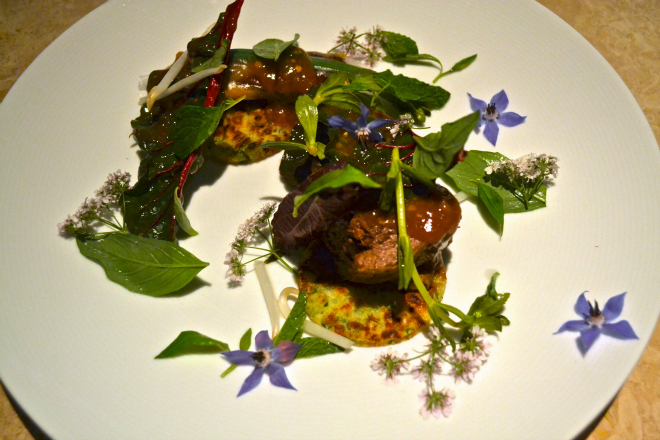 Chef Miles Thompson of the new Allumette in Echo Park is known for turning classic Asian dishes on their head, like the oyster suspended in kimchi gelée that he executed at his Vagrancy Project pop up, or his audacious riff on Din Tai Fung’s famous pork and shrimp chao shou dumplings.

Most recently, Thompson unveiled an unorthodox interpretation of the revered Vietnamese pho noodle soup. The twist? There are no noodles—and no soup. Is he pho real?

To be fair, the dish is listed on the menu as “Short Rib cooked in Pho.” A four-hour beef bone broth is used to braise the short rib overnight in the oven. The moist meat sits on Thompson’s miniature take on a traditional Chinese scallion pancake in which he adds tapioca for an amusing chewiness.

Representing the Philippines in the dish is lumpia spring roll stuffed with shrimp and pork. And as a shout out to the requisite herbs that accompany any good bowl of pho, a gang of freshly plucked mint, basil, and assorted fragrant leaves dress up the plate.

Thompson’s pho creation is a bold, fun re-imagining of the classic soup. Now I’d love to see what he’d do with my favorite wonton noodle soup. I’m certain his interpretation would be absolutely, er, wanton.