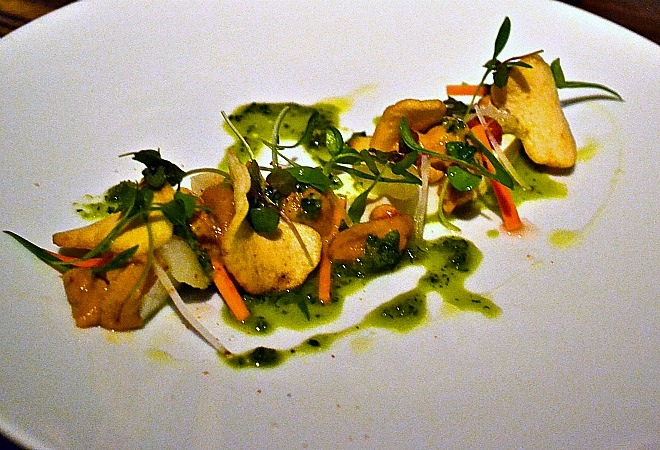 Ever notice that special dish or two on your favorite non-Asian restaurant’s menu that you can’t quite order at a straight-ahead, traditional Asian joint? “Asian Persuasion” is a once-in-a-while segment highlighting those chefs and restaurants that don’t specialize in Asian cuisine but occasionally dabble in cooking influenced by Far Eastern foods. But please don’t say fusion. Oh, no. Instead, let’s call it an Asian Persuasion. Doesn’t that sit better on the palate? Plus it rhymes.

Valentine’s Day brings with it the inevitable barrage of “aphrodisiac” food stories, products, promotions, desserts, and hors d’œuvres, which come whistling through the sky like a swarm of cupid’s arrows, striking all in its path with promises of passion but leaving most feeling like they were swindled by Spanish fly or counterfeit Viagra. If chocolate truly was an aphrodisiac, Willy Wonka’s Chocolate Factory would be located next to the Chicken Ranch. Hey, I got your Scrumdiddlyumptious Bar right here!

Chef Brendan Collins of Culver City’s Waterloo & City is a gastropub guru and master of meats. He churns out charcuterie like an oompa loompa cranks out everlasting gobstoppers. But he doesn’t exactly seem the romantic type—especially when gripping a butcher’s hacksaw. (Unless that’s your thing.) Still, it seems just too coincidental that his menu’s latest addition—which debuted so close to Valentine’s Day—happens to be one of the greatest alleged aphrodisiacs of all time: sea urchin, or uni.

The profoundly oceanic essence of uni is sealed within each tranche of this echinoderm’s gonads. Yes, if you weren’t aware or chose to look away, uni is the sex organ of a sea urchin. Bow-chicka-bow-wow!

In a new dish, Collins lays these luscious golden gonads along a bar of sweet, airy, creamy coconut Bavarois. The accompanying miniature shrimp chips and fried peanuts add a salty crunch, and lychee, basil, lemon grass, kaffir lime leaf, pickled carrots, tamarind, and cilantro make for a textural and flavor-packed extravaganza. The Thai layers get thicker with the addition of palm sugar, chili, fish sauce, and green curry paste. In the end, everything comes together in a distinctly Thai fashion.

Sort of a sexy cross between appetizer and dessert, the small plate is as intriguing as an Englishman in Siam. Like the uni it embraces, the Thai-inspired dish has us all hot and bothered—just in time for Valentine’s Day.