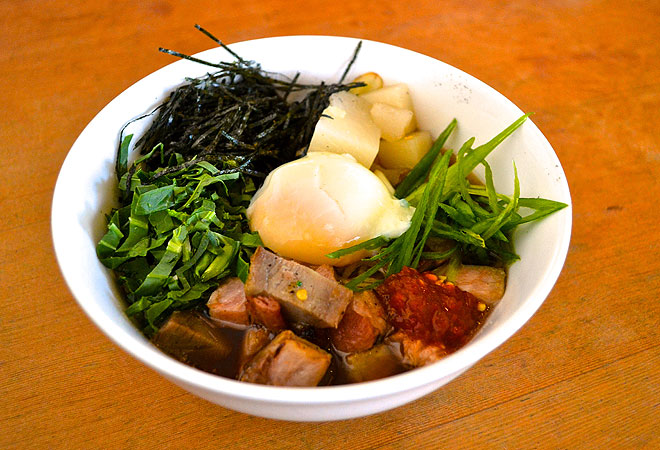 Ever notice that special dish or two on your favorite non-Asian restaurant’s menu that you can’t quite order at a straight-ahead, traditional Asian joint? “Asian Persuasion” is a once-in-a-while segment highlighting those chefs and restaurants that don’t specialize in Asian cuisine but occasionally dabble in cooking influenced by Far Eastern foods. But please don’t say fusion. Oh, no. Instead, let’s call it an Asian Persuasion. Doesn’t that sit better on the palate? Plus, it rhymes.

I’ll admit. I’m not good at predicting food trends. In fact, my predictions have gone about as well as Karl Rove’s forecasting the last two presidential elections, which is to say completely wack.

To date, in the year 2013, the trends that were totally off my foodie radar were: the horse meat brouhaha, food served in mason jars, and ramen in non-ramen restaurants. The last one particularly irks me since I’m supposed to be on top of all this Asian noodle stuff.

The latest chef on a mission to make me look like aNostra-dumb-ass is Jason Neroni of Venice’s Superba Snack Bar. He makes a version of ramen steeped in broth that’s made with concentrated braised bacon juices. It’s a sweet, smoky, and entirely bold variation on the traditional bone-based broth.

Anchoring the bowl are ramen noodles fabricated from butternut squash and semolina; the result comes surprisingly close to that perfect Asian chewy Q-ness with a touch of sweetness.

As is often the case with Asian food, the whole is greater than the sum of its parts here. The best moment comes at the end when the broth is a mangled mess of orgiastic flavors and it’s impossible to tell where one flavor ends and another begins. That is a prediction I can confidently throw out there.