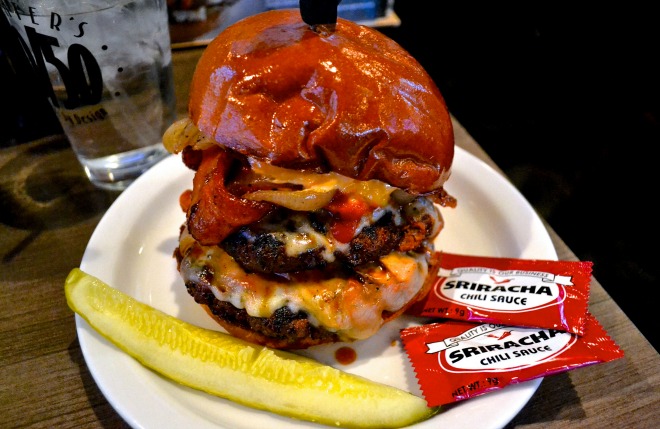 Strange events begin to happen when the end of the year draws near. Doomsday-type predictions run rampant in certain circles. Most often these dire forebodings are nothing more than paranoid delusions concocted by a crazed mind. But, only last week, an entire spice-loving population’s worst became reality: The Srirachapocalypse is here. There will be no new “rooster sauce” shipped until mid-January 2014.

Massive quantities of Sriracha hot sauce are now quarantined at the Huy Fong Foods Inc. facility in Irwindale. The California Department of Public Health is keeping them there for 30 days because of the uncooked nature of the hot sauce. After 30 days, they will be tested for bacteria and, if all goes well, released back into the public. But until then, a dearth is near.

You’d never know there was a Sriracha shortage at Slater’s 50/50, especially after chomping into its heaving Sriracha burger. In fact, due to Slater’s 50/50 anticipation of the current shortage, the restaurant chain seriously stocked up on the sauce—sort of like a Sriracha survivalist.

The Sriracha burger at Slater’s is a study in the many ways one can incorporate  rooster sauce into the components of a sandwich. Slater’s 50/50 patty (a 50/50 blend of 80/20 chuck and bacon) is mixed with Huy Fong Foods brand Sriracha and Chili Garlic sauces. The grilled patty then sits atop Sriracha dressed coleslaw. Mushrooms sauteed in Sriracha slide in under thick strips of Sriracha candied bacon. Then, the finishing touches are added: melty pepper jack cheese, Sriracha mayo, and still more Sriracha, all stuffed between a hapless brioche bun. (It’s the red-dest burger I’ve ever seen.)

If you can’t get enough Sriracha, Slater’s Sriracha burger will not disappoint. Virtually every molecule of the burger weeps Sriracha. Yes, the Sriracha sky has fallen, but at least some of it landed at Slater’s 50/50.