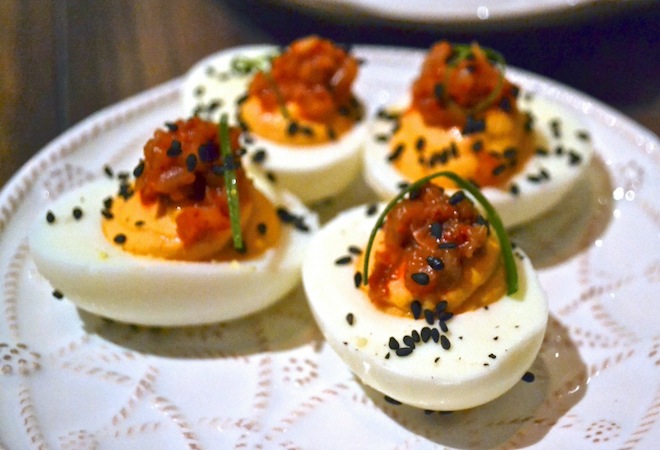 “Asian Persuasion” is a once-in-a-while segment highlighting L.A. chefs and restaurants that don’t specialize in Asian cuisine but occasionally dabble in cooking influenced by the Far-East. But please don’t say fusion. Oh, no. Instead, let’s call it an Asian Persuasion. Doesn’t that sit better on the palate? Plus, it rhymes.

Deviled eggs have been the retro hors d’oeuvre du jour for a while now—from Jar and its crab-topped version to Freddy Smalls and its hot wings-inspired spin, every restaurant seems to have its own take on the picnic classic.

But lately I’ve noticed an even narrower riff on the trend, with chefs across the country incorporating kimchi into the hard-boiled mixture. The Spinster Sisters restaurant up in Santa Rosa whips up a bacon deviled egg with house-made kimchi. In New York, David Chang’s Booker & Dax bedevils its deviled eggs with a combo of kimchi and tobiko roe.

Bringing the trend to L.A. is the shiny, new Faith & Flower in downtown’s South Park district, where chef Michael Hung flavors his eggs with Korean chili and kimchi. That the eggs are from fancy-pants Jidori chickens only gives the snack more cred.

“It is like my take on banchan,” says Faith & Flower’s executive chef Michael Hung. “Like the potato salad at Korean BBQs. I might even add bits of apple into the deviled egg.”

Hung explained that they make the napa cabbage-based kimchi in-house. “ It’s covered with sea salt to extract moisture and then rubbed down with a paste of garlic, ginger, Korean chili, and gochujang.” The whole mess of spicy deliciousness ferments for three to four days and then goes into the fridge.

The egg yolk gets the royal treatment as well. “The yolk is extracted and mixed with a basic aioli. Then it’s blended until smooth with juices from the house-made kimchi, gochujang, sesame oil, and finally salted to taste. After the egg is reassembled, it’s topped off with the kimchi, chopped scallion, and black sesame seeds.”

This may seem like a lot of fuss for a deviled egg, but once you taste it, you’ll understand that a delicious devil is in the details.

Keep your eyes peeled for more twists on Asian fare at Faith & Flower including Filipino sweet longanisa sausage as well as dinuguan, a Filipino blood stew. After all, chef Hung is of Filipino and Chinese descent, and he keeps his cooking real.