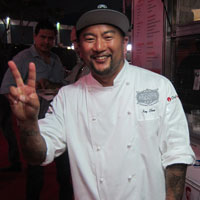 We’re not sure what kind of crazy world this is when there’s a ridiculously long line in front of Mr. Chow’s booth and no wait to sample Ricardo Zarate’s food, but such were the happy circumstances at last night’s Asian Night Market. After a high-profile debut in 2011, the second annual Los Angeles Food and Wine kicked off yesterday.

The lines were expectedly long at the Kogi truck, where Roy Choi cheerfully handed out short rib tacos and posed for pictures. Jet Tila’s pork belly buns were a big hit, while foodies also flocked to the Taiwanese beef sandwiches from Huge Tree Pastry and the Malaysian curry chicken from Starry Kitchen. The most visually stunning bite came from Pineapple Express, a recently launched Hawaiian food truck that was dishing up miniature loco mocos, each topped with a quivering golden egg. The latest iteration of the LAFW has scaled down both in terms of its size and its ambition, which means it’s still plenty gluttonous but a whole lot more manageable.