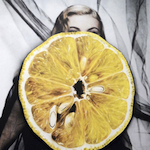 If you’ve never seen the work of Swiss artist Urs Fischer, you should get yourself to the MOCA downtown sometime before August. A new exhibition featuring some of Fischer’s most well-known works opened last week, and though it’s taken the art world by storm, it hasn’t yet caused much of a stir in the food world. This surprises me, considering the obvious and playful ways Fischer uses food as both a medium and a theme in his art.

In his Problem Paintings series, Fischer has juxtaposed black and white portraits of Hollywood stars with stark, color images of fruit, vegetables, and fungi. In an interview with GARAGE magazine recently, Fischer was asked if the juxtaposition was like the surrealists’ idea of the sewing machine and the umbrella, a chance encounter? But he said no, that it was like a distracting sort of collage, and “[t]he funny thing is that fruits are more universal than movie stars.”

Also on view now is Untilted (Bread House) which is, as it sounds, a house made out of bread. Each time the artist constructs it, he uses real bread, sourced from a local bakery, and as time passes and patrons view it, it crumbles. Though it looks delicious this week, it will eventually begin to show its age. GARAGE magazine called it something out of “a dark Alpine fairy tale.”

Since food plays such a large part in Urs’ work, we had to wonder how he feels about food in his every day life. As it turns out, Fischer and his team of artist assistants (12-15 people, depending on the day) come together for a home-cooked meal each afternoon. It’s a family-style meal that’s usually cooked by one of the assistants, Mina Stone. Ms. Stone is currently working on a cookbook with Urs under his publishing imprint, Kiito-San.

Still, Fischer likes to maintain a burly air of nonchalance, something many art critics have a hard time pinning down. When asked if there was anything about Urs’ relationship to the food of his youth that has directly influenced his art, Jessica Morgan, the exhibition curator, replied tersely, “A lot of artists are very hungry and Urs likes to eat.” Sounds like we have something in common.