Home Food & Drink Artist John Kilduff Will Paint You a Cake at His New L.A.... 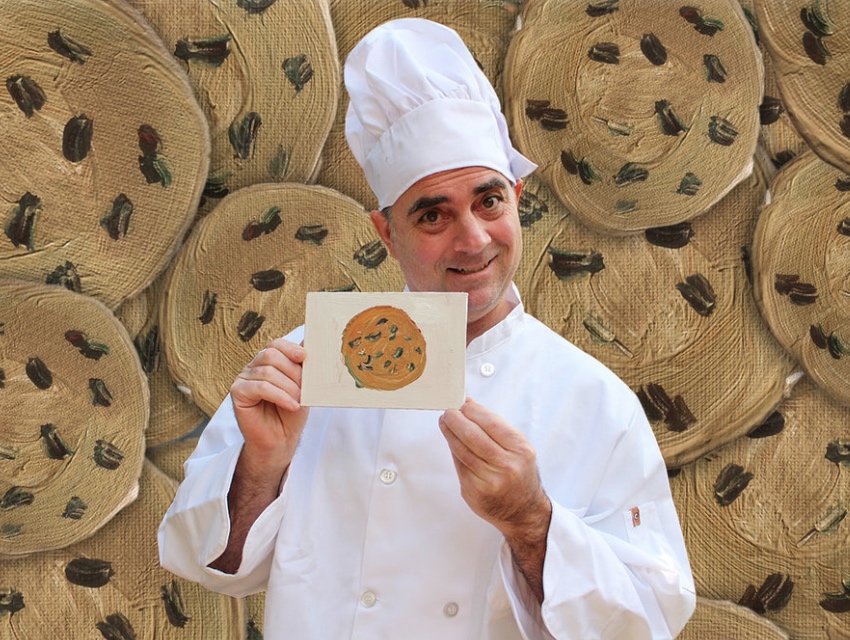 Artist John Kilduff is probably best known for his long-running live show Let’s Paint TV, which started off as a local cable-access offering in 2001 and eventually transitioned into a Youtube series. While the series (which is cited by comedian Eric Andre as an influence) tends to defy description, episodes usually involve Kilduff running on a treadmill while painting, taking phone calls (mostly from weirdos), and encouraging viewers to surmount adversity, be creative, and get out of their boxes.

On Kilduff’s show and throughout his body of work, food is a loosely running theme. In one of his most popular episodes, he does all the aforementioned multi-tasking while also blending a citrus-based drink; in others, he makes pancakes and sushi-gingerbread houses. Off screen, a few years back, he converted a Downtown gallery space into a fast food restaurant out of cardboard, where he sold paintings of burgers and other fast food, sometimes made to order. In what he calls an “added follow up to that idea,” Kilduff will turn his focus to cakes, cookies, and other pastries for Kilduff’s Bakery at LA Art Show, which takes place later this month.

Presented by the Daniel Rolnik Gallery, the “bakery” installation will be set up to look a like a small pastry shop in a 4′ X 8′ space. Kilduff will be at his easel during all five days of the event, making “freshly baked paintings” onsite. He’ll be wearing a chef’s hat and coat to really drive home the concept. There will also be a counter, where show-goers can purchase the paintings as well as food-themed works from other artists, including Turtle Wayne and Kat Philbin.

The paintings he’s created so far for the show, dreamy, textured croissants and chocolate chip cookies, have the surreal quality of artist Wayne Thiebaud’s popular food-themed works. And, he seems to welcome the comparison, even joking that “[Theibaud] plus Claes Oldenburg equals John Kilduff.” Kilduff’s mention of the latter artist is a reference to “The Store,” a concept shop that Oldenburg opened on Manhattan’s Lower East Side in 1961, where he sold little sculptures of everything from ice cream to hats.

Is there a deep meaning to all this for the artist? Sure, and it also seems to be an exercise in creative restraint. “Painting, in general, is always looked upon as very serious, and I try to shy away from that, even if I can get pretty serious about it myself,” says Kilduff, who bemoans the idea of people quitting because they can’t produce masterpieces. “When I’m making these batches of paintings—a batch of cakes—I’m making ten of them…I’m making a whole bunch at the same time. It frees the artist up. You’re able to get into a rhythm through the process.”  Interestingly, he says his cinnamon roll paintings have been his most successful so far, whereas his lemon meringue pies became too intricate for his tastes. “The meringue and the yellow,” he says with an exasperated sigh. “It was just not a good batch.”

Kilduff’s Bakery will be presented at LA Art Show, which takes place January 27-31 at The Los Angeles Convention Center. Find it in the Littletopia section. Tickets ($15/day) for the show can be purchased here.

The Los Angeles Art Show Returns—Everything We Know So Far

Check Out Some of Our Favorite Pieces From the Massive L.A. Art Show