Home Uncategorized Are You Ready For This Jelly? Jellyfish Soup at Sanamluang 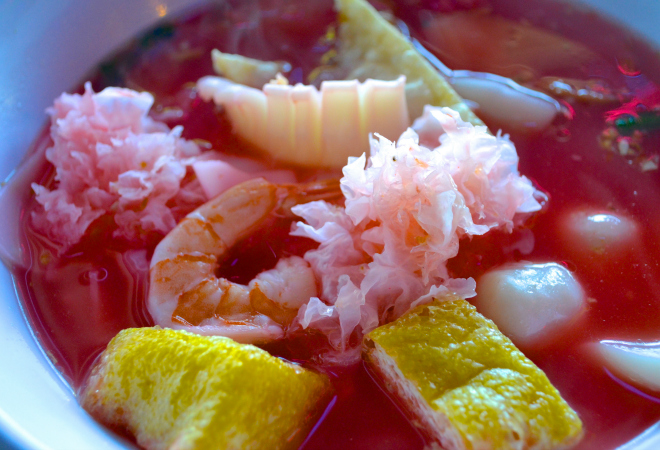 Do not adjust your screen. This bowl of Thai soup called yen ta fo is supposed to be pink. More precisely, it’s supposed to be an ’80s neon pink á la the Go Go’s. The soup’s peculiar tint is owed to a salty and pungent red fermented bean curd paste, a derivative of Chinese red fermented tofu called doufu ru, also known as Chinese cheese.

Jellyfish is the bonus and, perhaps, the best ingredient of the bunch. Traditionally coagulated pork blood is included in this day-glow soup, however I’d rather savor alluring sea creatures like jellyfish than a random clot of pig plasma. Masticating the jelly is similar to chomping into a wet, floppy, crunchy carnation with its intricate folds and petals. It’s very strange and somehow very satisfying.

A traditional broad rice noodle called sen yai is supremely slurpable and appears to have been run through a paper shredder with its haphazard appearance. Thirsty, spongy, fried tofu cubes soak up the soup for a piquant burst.

Yen ta fo, with its sweet, salty, tangy, and slightly pungent profile, is on a planet of its own when compared to other more familiar flavors in Thai soups like tom kha gai, the classic Thai coconut chicken soup.

But if yen ta fo soup’s unique sapor isn’t odd enough for you, think pink and ask yourself if you are ready for this jelly (fish soup).