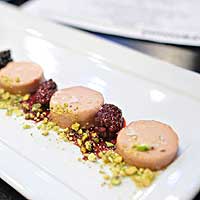 We can thank Kevin Eats for this one: While checking out Playground, a new restaurant in Santa Ana, the food bloger-photographer discovers that if you buy the kitchen a round of beers (which apparently costs exactly $24), the staff will send out a complimentary dish out of appreciation. How thoughtful!

The dish, it turns out, is discs of Sauternes-laced foie gras torchon with toasted pistachio and blackberry-maple jam.

Chef Jason Quinn’s restaurant was known for innovative foie presentations before the California ban went into affect, and it looks like nothing’s changed. “The foie was classic in essence, with the sweetness of the fruit melding well with the liver,” says Kevin, “while the pistachio served as a nutty counterpoint and also provided a keen textural contrast.” Sounds delicious.

There’s nothing technically “illegal” about what Playground is doing—they’re not actually charging for the foie gras—and Quinn isn’t alone in openly shunning the ban, either. Spots like Hots Kitchen and the supper club Kali Dining have both been handing out the controversial ingredient through what seem like loopholes in the law—for now.

We’re not sure this will go on for long, but until the state figures out how to efficiently enforce the ban, you can expect to see (and eat) more of this kind of thing.