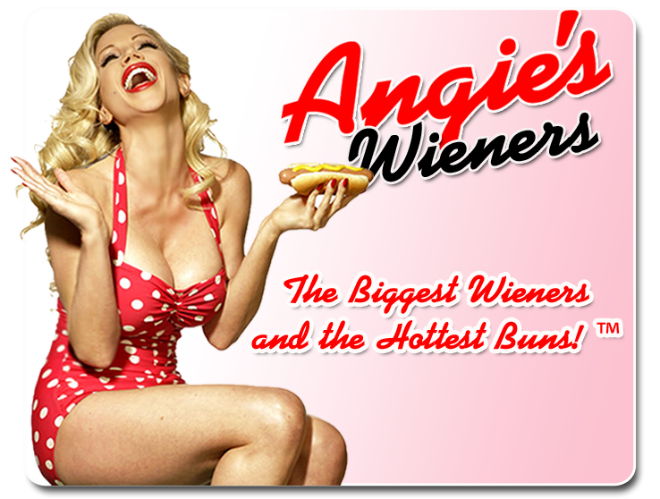 It’s a story straight out of Hollywood: all American girl, Angie Stevenson, comes to tinsel town with big dreams. She has a successful—if brief—career in the adult film industry, becomes one of the few to transition into mainstream movies, television, and modeling, and then opens a food truck.

You may recognize Stevenson from her recent role as a blonde bombshell on season six of Sons of Anarchy. If you’re a SyFy Channel buff, you’re sure to recall this sassy, flirty actress from Piranahconda, where she starred alongside Michael Madsen and Rachel Hunter. It was on the set of this film that she found a partner in producer Forest King. That’s when she began her love affair with the hot dog.

The Angie’s Wieners truck quietly debuted at the DTLA Art Walk just before the end of the year. As the bubbly Stevenson greeted the crowd, along with her sister Avery Rose—both dressed in the sexy wiener-girl attire—chef Ken Romo assembled the truck’s signature items.

Angie’s Leading Man, a foot-long beef frank, comes with house-made chili, sharp cheddar cheese, and hot mustard on buns made in our own backyard by Homeboy Bakery. The Femme Fatale is an eight-inch chicken dog dressed in ranch dressing; a spicy aioli with blue cheese is drizzled on top. You can get Angie’s Tots—ahem, tater tots—with the house dipping sauce, too. There’s even a dessert hot dog made from a banana encased in peanut butter, with honey, and a light dusting of powdered sugar. It’s called The King—obviously, a tribute to Elvis.

The menu teases with playful innuendo, and Stevenson’s slogan is “we’ve got the biggest wieners and the hottest buns,” but this blonde’s ambition is actually on the food.

4 Hot Dogs in L.A. That Are Anything but Mundane