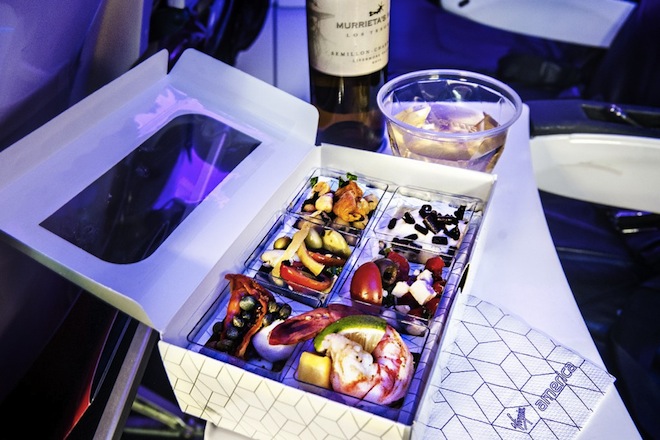 No one has ever written an ode in praise of American airplane food. More often than not, it’s inedible and eating it can be as risky as sitting in the emergency exit row. But two major American airlines are looking to change airplane food’s unfortunate reputation.

✈ Delta Airlines has this fall partnered with Food & Wine magazine to launch The Cabin Pressure Cook Off. This culinary competition video series (seemingly in the style of Top Chef) will result in Delta’s new corporate chef, to be based out of Atlanta. Four former Food & Wine Best new chefs winners will compete: Hugh Acheson of Empire State South in Atlanta; Linton Hopkins of Restaurant Eugene in Atlanta; Kelly English of Restaurant Iris in Memphis; and George Mendes of ALDEA in New York.

✈ Virgin America is taking a hint from popular restaurants around the country and releasing a menu of seasonal small plates. The small plates trend continues to thrive in new, single unit restaurants around Los Angeles, but its premise—to allow diners to share tastes of food with each other—doesn’t seem to translate to the average airline dining experience. No matter. These meals, now available on flights between L.A. and New York, actually sound tasty! Here’s a sample: